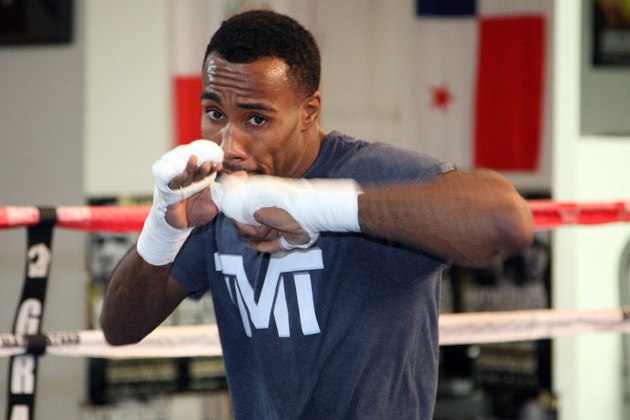 Lightweight Mickey Bey returns to the ring against Alan Herrera, and junior middleweight Erislandy Lara will battle ex-beltholder Ishe Smith on May 2 on Fox Sports 1 and Fox Deportes from the Hard Rock Hotel and Casino in Las Vegas, Golden Boy announced on Tuesday.

"With the entire boxing world focusing on Las Vegas, we're giving fans another stacked card the night before 'The Moment," said Richard Schaefer, CEO of Golden Boy. "Two championship fights and a great matchup between top prospects will get the weekend started right on Fox Sports 1 and Fox Deportes."

"May 2 should not be overlooked by any means," said Leonard Ellerbe, CEO of Mayweather Promotions. "We have put together a card with a roster of top tier talent that will be showcased come fight night. I'm sure no one in the building or watching from home will be disappointed."

A southpaw nicknamed "The American Dream" who turns 31 next month, Lara (19-1-2, 12 knockdowns) scored an 11th-round knockdown during a one-sided unanimous decision win over fellow leftie Austin Trout in December that followed his rising from knockdowns in the fourth and ninth rounds of a 10th-round stoppage of Alfredo Angulo last June.

"Ishe Smith talks a lot on the internet. Let's see if he fights as well as he talks. I'm on a different level, and he'll know that as soon as the first bell rings," said Lara of Smith, who is promoted by Mayweather Promotions.

"He's fighting the best super welterweight in the world, and the pressure is mounting on him, so he's trying to build himself up mentally. Come May 2, I'm going to do Mayweather a favor and retire him."

The 35-year-old Smith (25-6, 11 KOs) was last in the ring for September's split decision loss to Carlos Molina, who earned the IBF belt Smith had won from Cornelius Bundrage by majority decision in February 2013.

"This is a dream come true…To be doing it in front of my hometown fans and family is a blessing. I'm truly honored. Lara was offered a chance to fight me back in 2012, and he turned it down to fight Freddy Hernandez instead," said Smith.

"I will show him he was right in turning the fight down the first time. I'm ready to lay it all on the line to regain one of the super welterweight championships. Come May 2 I will turn his American Dream into an American Nightmare."