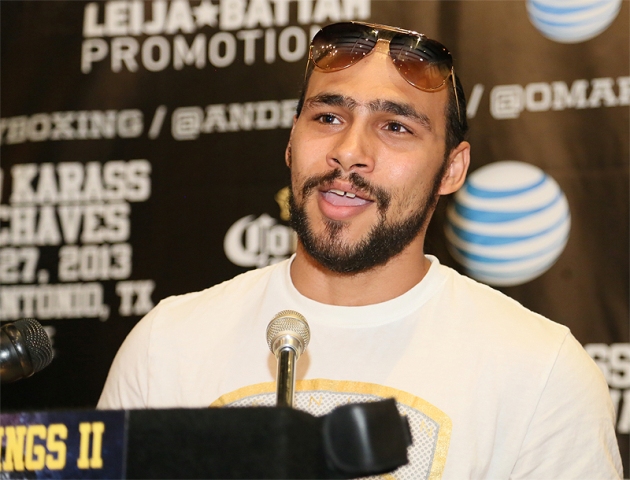 Thurman (22-0, 20 knockouts), a 25-year-old from Clearwater, Fla., scored a ninth-round technical knockout over veteran gatekeeper Jesus Soto Karass, who was floored once each in the fifth and final rounds of their bout in December. In his previous bout, last July, Thurman scored a 10th-round knockout of previously unbeaten Argentine Diego Chaves, whom he dropped once each in the ninth and final rounds.

Although the 34-year-old Diaz (40-9-1, 29 KOs) is 0-2-1 in his past three fights, those bouts were a draw and a unanimous decision loss against unbeaten current IBF beltholder Shawn Porter and a close decision setback to former titleholder Amir Khan.

In succession, Diaz drew with Porter in December 2012, floored Khan in the fourth round in April of last year, and was outpointed in December by Porter, whose next bout was a unanimous decision that dethroned Devon Alexander in December.

Diaz has been working out with WBO 147-pound titleholder Tim Bradley in advance of Bradley's April 12 rematch with Manny Pacquiao, whom Bradley dethroned by split-decision in June 2-12.

"I think that Keith Thurman against Julio Diaz is one of those fights where, obviously, Keith is the favorite, but Julio Diaz is a fighter who always comes to fight. It seems like those fighters from the Coachella Valley and from Riverside, like Josesito Lopez and Mauricio Herera and Julio Diaz, they love to be spoilers," said Schaefer, referring to Lopez's knockout of Victor Ortiz, and Herrera's majority decision loss to RING 140-pound champion Danny Garcia.

"Just when Julio Diaz went over to England and fought Amir Khan, he realizes that this is a tremendous opportunity for him. He always comes to fight, and Keith Thurman is obviously considered to be one of the big names and one of the fast emerging stars at 147. Plus, Keith has a big target on his back, just like Danny Garcia did a few weeks ago in Puerto Rico. These guys who are considered to be opponents are suddenly are not just opponents, but guys who want to capture the opportunity. I know that Julio Diaz is exactly like that."

"I know that Thurman is happy to be in the mix around the time frame that Porter and Malignaggi are fighting," said Schaefer. "Then, on May 3, many of the other welterweights will be in action. So I think that it's important for Keith Thurman to be in that group, and he's happy to be back in the ring."

A 31-year-old Argentine, Matthysse (34-2, 32 KOs) was last in the ring in September when he was dropped in the 11th round of a unanimous decision loss to unbeaten Garcia, the RING, WBA and WBC junior welterweight champion.

Before falling to Garcia, Matthysse had built a 4-2 record (with four knockouts) against six current or former titleholders, having floored all of them.

Last May, Matthysse registered three knockdowns during a third round stoppage of IBF 140-pound beltholder Lamont Peterson in a non-title bout for his sixth straight knockout win.

Molina (27-3, 22 KOs), meanwhile, is 3-2 with three knockouts in his past five bouts, the first of which was a first-round stoppage loss to former titleholder Antonio DeMarco in September 2012.

Molina split his next two bouts, stopping Dannie Williams in the first round last January before falling by majority decision to Andrey Klimov in June.

But the 31-year-old Southern Californian has knocked out his past two opponents, coming from behind to stop previously unbeaten Mickey Bey in the 10th round last July, and knocking out Jorge Pimentel in the second round in November.

The 24-year-old Figuroa (22-0-1, 17 KOs) had to pull out of a scheduled March 8 defense of his WBC 135-pound defense against Ricardo Alvarez due to a hand injury, but said that his hand is recovering.

An all-action, fan-friendly fighter, Figueroa won his belt against Nihito Arakawa, flooring the Japanese veteran twice during a unanimous decision in August.

March 8 was a banner night for the 25-year-old Belmontes (19-3, 5 KOs), who spoiled the U.S. debut of previously unbeaten Will Tomlinson of Australia. Figuroa of Weslaco, Texas, never has beaten amateur nemesis Belmontes, of Corpus Christi, Texas.

"We have the opening bout with Omar Figueroa, who is one of the most exciting fighters in the sport, against Jerry Belmontes, who had a big win against Tomlinson," said Schaefer.

"So that's going to be a very entertaining and exciting fight. To have Omar Figueroa, followed by Lucas Matthysse, and then, Keith Thurman, all in one night, I can tell you that this is going to be, top-to-bottom, one of the most exciting cards we have done in a while."