Cornelius Bundrage: Turning 41 ‘ain’t nothing but a number’ 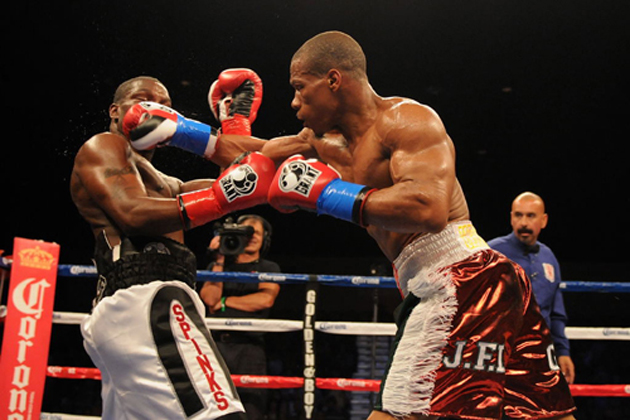 Cornelius Bundrage turns 41 on April 25, exactly 11 days from the date he is scheduled to be declared, officially, as the man against whom Carlos Molina must defend his IBF junior middleweight title.

But the former titleholder remains confident not only due to his lifestyle and spiritual beliefs but also, the success of others in the sport who have either surpassed or are approaching the age of 40.

"Just look at some of the fighters today," said Bundrage, during a Monday interview with RingTV.com. "It seems like today, 40 ain't nothing but a number. To me, the age of 40 is like the new 25."

One of those is 6-foot-5 heavyweight Tony Thompson, a 42-year-old, married father of seven, who by virtue of split-decision, outlasted 2004 Cuban Olympian Odlanier Solis in Turkey last Saturday.

Another is Bernard Hopkins, the 49-year-old IBF light heavyweight beltholder, who wants to become the first to unify his division at his age. Already the oldest man to win a significant crown, Hopkins will face WBA counterpart Beibut Shumenov on April 19 with the long-range goal of fighting the winner between hard-hitting counterparts RING and WBC champion Adonis Stevenson and WBO beltholder Sergey Kovalev (should those two do battle this year).

Still another is the number one man in THE RING's pound-for-pound ratings, Floyd Mayweather Jr., who turned 37 in February. In his last fight in September, Mayweather dethroned Saul "Canelo" Alvarez  by majority decision for the RING and WBC junior middleweight championships.

Already the WBA's reigning 154-pound titleholder, Mayweather will also defend his RING and WBC 147-pound championships against Marcos Maidana on May 3.

"Tony Thompson just won and how old is he? I know that Floyd is three years from being 40 at the age of 37 and he's looking better than ever. The last time that I checked, Bernard Hopkins was going on 50 and he's looking pretty good as a world champion," said Bundrage.

"I'm a fresh 40-year-old. I've never had a beatdown and I've had maybe one war in my entire career. I stay in good shape. I don't smoke or drink or none of that. As long as you keep God first, then all things are possible. I could fight until I'm 47 or 48 if I want to. It's all about the person you are."

Molina was last in the ring for September's split decision victory over Ishe Smith, who lost the IBF belt he had won from Bundrage by majority decision from in February 2013.

Bundrage entered the bout against Smith after having scored a seventh-round stoppage of Cory Spinks in June 2012. The bout with Spinks was a rematch for Bundrage, who originally dethroned Spinks by fifth-round stoppage in August of 2010.

"When I won the first title the first time," said Bundrage, referring to the bout in Saint Louis, Mo., "I took it from Cory Spinks in his own hometown and the crowd went crazy."

Bundrage appears to be in line to regain his title, according to IBF Championships Chairman Lindsey Tucker, since the jailed Molina has until June to make the mandatory defense of his belt or risk being stripped.

Molina was arrested earlier this month and remains in a federal immigration holding cell at the Clark County Detention Center in Las Vegas. His detainment forced the cancelation of his scheduled March 8 defense, which was optional, against Jermall Charlo.

"This was an optional defense. When it comes time to do the mandatory, if [Molina] is still unavailable, then it becomes a problem," said Tucker during a March 7 interview with RingTV.com. "He beat Ishe Smith on September 14 and we will notify him on April 14 and then his mandatory is due on June 14."

If Molina is not available, Bundrage, as the mandatory challenger, "would fight whoever the next leading available contender is," said Tucker on Monday. "We're just waiting for April 14 to come around to send a letter to Molina to let him know that he has to start negotiations with Bundrage."

A request by Molina for a unification bout against the WBA, WBC or WBO beltholder might take priority over a defense against Bundrage, as could "an exception," if granted, to "fight somebody other than Bundrage," said Tucker.

However, at this point, neither seems likely.

"It's in God's hands," said Bundrage. "Being a two-time world champion is all that I'm concerned about right now."