Luis Collazo to ‘take care of business’ vs. Amir Khan 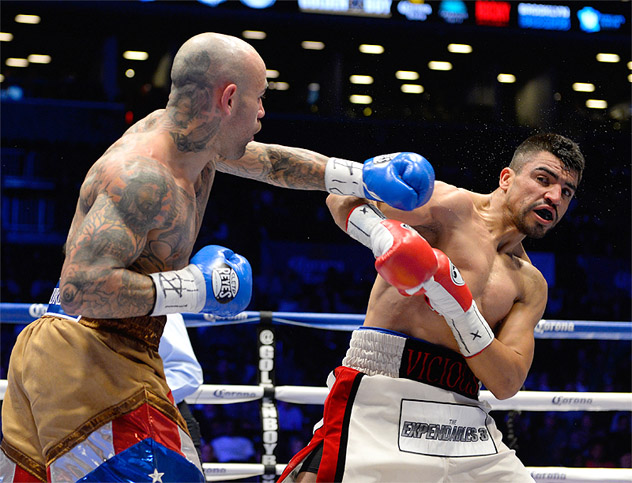 Luis Collazo admits to having watched Amir Khan's last knockout loss, in which a sensational left hook by RING, WBA and WBC 140-pound champion Danny Garcia led to a fourth-round stoppage in July 2012.

That punch was similar although with the opposite hand to that landed by Collazo in his last fight, when the southpaw's right hook knocked Victor Ortiz out in January.

"I've watched that fight for sure," said Collazo, 32, whose bout with Ortiz matched a pair of well-traveled, former welterweight titleholders at Barclays Center in Collazo’s hometown of Brooklyn.

"But I'm a veteran, so I've got to break him down first because you can't be like a kangaroo running all over the place. I've got to go back and watch some of the other tapes of his fights that he's fought the last few times. Then I just have to be smart and use my experience and go in there and just take care of business."

Collazo (35-5, 18 knockouts) will pursue his fourth straight victory when he faces Khan (28-3, 19 KOs) in a May 3 welterweight clash of former titleholders in support of Floyd Mayweather Jr.'s RING, WBC and WBA 147-pound championship defense against Marcos Maidana at the MGM Grand on Showtime Pay-Per-View, Golden Boy Promotions CEO Richard Schaefer announced on Monday.

"This moment is still marinating with me," said Collazo, "but I know what it takes to get here because I've been here before. I've been waiting for this fight with Amir Khan and to finally get it against a young fighter is exciting."

Khan will look for his third straight victory in as many fights under trainer Virgil Hunter, who replaced Freddie Roach after Khan was stopped by Garcia. Prior to facing Garcia, Khan had lost a disputed split decision to current IBF 140-pound beltholder Lamont Peterson in December of 2011.

Khan has been victorious, however, in his past two bouts, by 10th-round knockout over Carlos Molina (a California-based lightweight prospect not to be confused with the IBF junior middleweight titleholder of the same name) in December of 2012 and by unanimous decision over former titleholder Julio Diaz last July.

Collazo split-decisioned Jose Antonio Rivera for the WBA's 147-pound belt in April of 2005 and stopped Miguel Angel Gonzalez in the eighth round of his first defense four months later. He lost the title to Ricky Hatton in a disputed unanimous decision after being floored in their first round in May of 2006.

From there, Collazo went 3-2 with two knockout wins over his next five fights, falling by unanimous decision to Shane Mosley and Berto in February of 2007 and January of 2009, respectively.

Collazo has gone 6-1 with four knockout victories since and is 4-0 with two knockouts since falling by 10-round unanimous decision to Freddy Hernandez, who dropped him in the eighth round in October 2011.

Before winning a unanimous decision over Alan Sanchez in Texas in September, Collazo had won two straight with each of the wins taking place at Barclays Center.

"I'm excited to be fighting Amir Khan in this situation, man. This is like the opportunity that I had to fight for the world title for the first time," said Collazo.

"I'm just really excited because it's been a long time coming. It's just amazing how things are working out and I'm thanking God for it. Amir Khan has never fought at 147 pounds but, hey, I'm going to welcome him into the division."