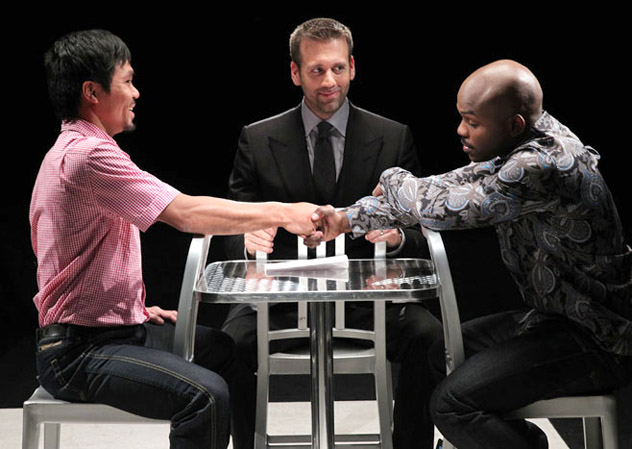 Toward the end of Saturday night's 15-minute HBO premiere of Face Off with Max Kellerman, Tim Bradley looked Manny Pacquiao directly into his eyes and questioned his rival's resolve.

"I don't know how he lost it. Before, he was malicious. Before, he was blazing, like, 'I'm going to knock you out, I don't care.' But now, he's in a different place now. I'm telling you, he's not the same. He's not the same. I'm telling you. He's a tremendous fighter, like I've told you. He's a tremendous fighter. But I don't see it. I do not see it."

Pacquiao stared back at Bradley before responding.

"I pray that God can give me that fire," said Pacquiao. "Another fire. I will pray for that."

"I believe that…Absolutely," said Pacquiao. "I can do that, in God's grace. Nothing is impossible with God."

"This is like redemption. It's unfinished business," said Bradley. "This is like that dark cloud that's still looming over boxing. Like, confused about who won the fight and who didn't win the fight."

In his past three fights, Bradley dethroned Pacquiao, rose from a 12th-round knockdown to unanimously decision Ruslan Provodnikov in March 2013 and then won a split-decision over four-division titlewinner Juan Manuel Marquez in October.

"I'm right in the forefront of greatness, and to being a superstar in the game. I'm a lot better then when I first faced Manny. I'm a lot better now. I'm a very smart fighter and a very intelligent fighter. He doesn't know what I'm going to do. He can guess, and train for whatever. You know what the hardest thing about me is, Pacquiao? Is that you just can't train for one thing. I can do it all in there. I can brawl and I can box."

After the Bradley fight, Pacquiao lost by sixth-round stoppage in December 2012 to Marquez, against whom Pacquiao is 2-1-1, before winning a unanimous decision over Brandon Rios in his most recent fight last November.

Against Rios, Bradley contended that what Pacquiao "lacked was the ability to finish like he used to," adding, the "power wasn't really there."

On the night of the fight, Bradley defeated Pacquiao by scores of 115-113 on the cards of official judges C.J. Ross and Duane Ford, while Jerry Roth had it the same way for Pacquiao. An informal poll of 51 writers favored Pacquiao over Bradley, 48-3.

"The first fight, Manny, I didn't have my feet under me from the second round on," said "," said Bradley, who attended the post-fight press conference in a wheelchair and with no shoes on his feet. "From the second round, I didn't have my footing. Fourth round, too. I hurt the other foot, Manny. This time, I'm going to be real healthy. Really healthy for this fight."

Having failed to score a knockout since stopping Miguel Cotto in the 12th round in November 2009 — he is 5-0-2 with no stoppage in his past seven bouts — Pacquiao, in turn, promised to return be more deliberate in their return bout.

"I'm just too nice, sometimes…My plan in this fight is to throw a lot of punches. More than [in the Rios fight.] I don't care if the fight is stopped or not. This time, I have to prove that I can still give a good show. That I'm a hungry Manny Pacqiuiao. Aggressiveness."