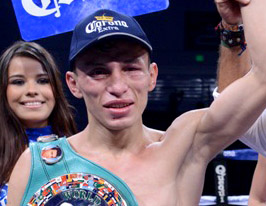 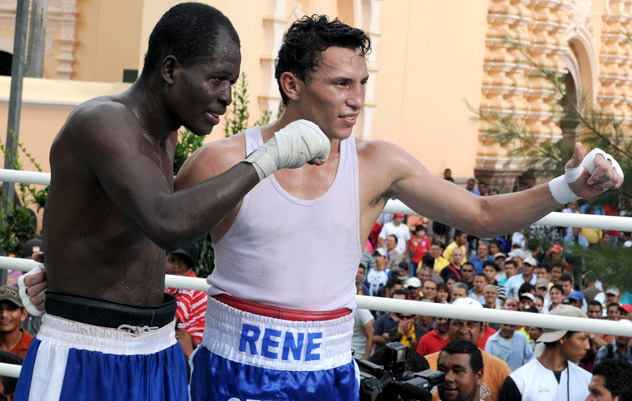 Rene Alvarado (R) at an exhibition match with Miguel Gonzalez in 2011. Photo by Orlando Sierra/AFP-Getty Images

The 25-year-old Alvarado (20-2, 14 knockouts) is coming off last month's ninth-round knockout of Robinson Castellanos in Mexico.

"This is the most exciting moment of my career, and as a member of the Golden Boy Promotions team, I know I'll get every opportunity to achieve my dreams in this sport," said Alvarado, as quoted in a Golden Boy press release. "My win against Castellanos was just the beginning, and I hope to get a world title fight soon."

The stoppage of Castellanos was the third straight for Alvarado since falling by unanimous decision to once-beaten Jezreel Corrales last January.

"Rene Alvarado flew onto our radar with his win over Castellanos last month, and with his skill, determination and warrior spirit, we believe he has all the tools to become a world champion," said Schaefer. "He is a great addition to our team, and we're pleased to be working with him."

Alvarado's next matchup will be announced shortly.

NSAC HAS 10 FINALISTS FOR EXECUTIVE DIRECTOR

On Wednesday, the Nevada State Athletic Commission announced its 10 finalists to replace Keith Kizer, who resigned in January after nearly eight years as the executive director of the NSAC to return to the Nevada Attorney General’s office.  Kizer replaced longtime NSAC head Marc Ratner on June 1, 2006.

Below is a list of the candidates, in alphabetical order by their last names, e-mailed by chairman Francisco Aguilar:

"We’ll be diligent, but we’d like to have somebody in place before the [Floyd] Mayweather fight,” said Aguilar, according to ESPN.com, referring to  Mayweather’s May 3 welterweight unification bout with Marcos Maidana at the MGM Grand in Las Vegas. "I’m very pleased with the list. I think we have some have great candidates."

The position pays up to $97,901 annually, according to ESPN.com.