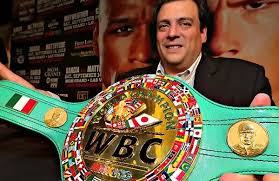 The 28-year-old Perez (20-0-1, 12 knockouts), a native of Cuba residing in Ireland, and the 29-year-old Jennings (18-0, 10 knockouts), of Philadelphia, are handled by Tom Loeffler of K2 Promotions and promoter Gary Shaw respectively.

Perez-Jennings is actually the second mandatory ordered by the WBC with the result of the first having been last Saturday's 96-second stoppage win by Deontay Wilder (31-0, 31 KOs) over Malik Scott.

In victory over Scott, Wilder became the mandatory challenger to the Bermane Stiverne-Chris Arreola rematch.

A unanimous decision winner over Arreola in April 2013, Stiverne faces him again on May 10 at a site to be determined for the title vacated by Vitali Klitschko.

The victor between Wilder and the Stiverne-Arreola winner must next face that between Perez and Jennings, said Sulaiman, who notified Loeffler and Shaw of the development on Monday.

"The heavyweight championship has not had any activity in about a year-and-a-half and that's why the WBC has ordered a tournament to have two mandatories. So first, we need to have a champion," said Sulaiman.

"That champion is going to be the winner between Stiverne and Arreola. The first mandatory contender is Deontay Wilder, so the winner of Stiverne-Arreola has to face Deontay Wilder. That would eventually play out by the end of the year. Jennings and Perez will be the second mandatory eliminator of the division and they would fight the champion."

Talks already have begun between Loeffler and Shaw, according to ESPN.com.

Jennings scored a 10th-round stoppage of Artur Szpilka in his last fight in January, the same month during which Perez battled once-beaten Carlos Takam to a draw.