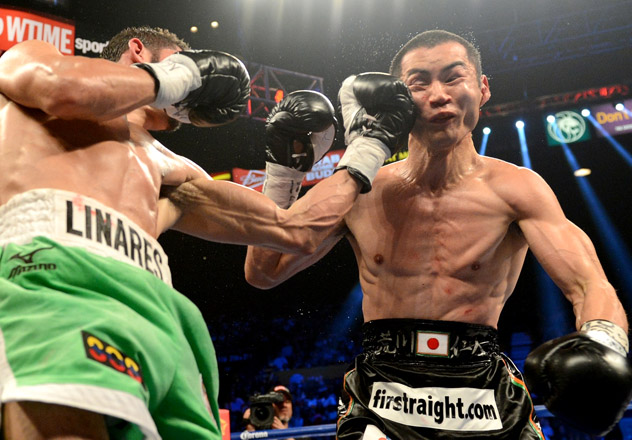 Many RING-rated fighters were in action over the past two weekends, resulting in a lot of movement in the magazine’s divisional rankings, including Tomasz Adamek’s drop in the heavyweight top 10 and Jorge Linares’ re-entry into the lightweight ratings.

Light heavyweight: No. 9-ranked Tony Bellew, as noted above, made his debut in the cruiserweight division so he will be dropped from the 175-pound rankings and Eleider Alvarez, (14-0-0, 8 KOs) will enter at No. 10 with Isaac Chilemba (22-2, 9 KOs) moving up to No. 9 on the strength of his unanimous decision over unrated Denis Grachev.

Junior middleweight: No. 1-rated Canelo Alvarez (43-1-1, 31 KOs) scored a 10th-round TKO over tough Alfredo Angulo. Alvarez was handily ahead on all score cards by a wide margin at the time of the stoppage. Angulo fought Alvarez’s fight by staying in front of Alvarez for nine plus rounds. No movement for Alvarez since he is already ranked No. 1.

Lightweight: Unrated Linares (36-3, 23 KOs) won a wide decision over unrated Nihito Arakawa. No. 6-rated Sharif Bogere (23-1, 15 KOs), who has not fought since March 2, 2013 and doesn’t have any fight scheduled, will be removed from the ratings. Everyone else will move up one spot and Linares will enter the ratings at No. 10. Sergio Thompson (29-3, 26 KOs), who usually fights at junior lightweight, won a deserved 10-round decision over unrated Ricardo Alvarez.

Junior lightweight: No. 10-rated Will Tomlinson (21-1-1, 12 KOs) lost a 10-round decision to unrated Jerry Belmontes by a wide margin. Tomlinson will be dropped from the ratings and Sergio Thompson will enter at No. 10.

Junior featherweight: Fernando Montiel (51-4-2, 38 KOs) weighed in at 128 to score a majority decision over former beltholder Cristobal Cruz. The panel feels that Montiel cannot come back down to 122 and thus will be removed from the ratings. He will be replaced at No. 10 by Genesis Servania (24-0, 10 KOs). No. 2-rated Leo Santa Cruz (27-0-1, 15 KOs) retained his WBC belt with a wide decision win over unrated veteran Cristian Mijares, who couldn’t cope with Santa Cruz, who will remain at No. 2.

Junior bantamweight: No. 3-rated Srisaket Sor Rungvisai (26-3-1, 24 KOs) stayed active with a second-round stoppage over the debut of Den Nattapol Gym. No movement.

Chuck Giampa is the Chairman of The Ring Ratings Committee. He can be emailed at [email protected]