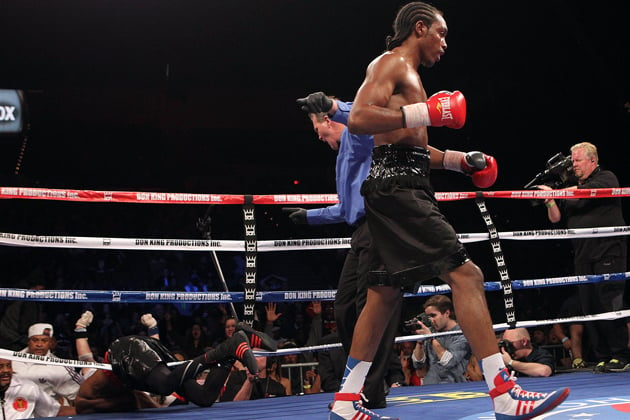 Friday, Feb. 21 (continued): I’ve seen several fighters fall out of the ring in my nearly 40 years as a boxing fan – Hasim Rahman’s epic crash against Oleg Maskaev in their first fight in November 1999 was among the most memorable – but I had never seen a tumble quite like the one Jared Robinson took in his fourth round TKO loss against Amir Imam.

Imam had just landed a massive right to the temple that caused Robinson’s body to squirt through the bottom two strands of ropes. Because of the way his torso twisted on the way out Robinson ended up landing head-first directly in front of Imam’s seconds.

Cut man Luis Perez reacted like most people would in such a situation: Although Robinson was an opposing fighter, he instinctively leaned over him and appeared as if he wanted to help. But Imam’s chief second Stacy McKinley, a boxing lifer best known for his work with Mike Tyson, Ray Mercer and Ricardo Mayorga, reacted just as reflexively by pushing Perez away. McKinley knew that any action by Perez – or anyone else — would result in instant disqualification for Imam because, by rule, Robinson had to get back into the ring within 20 seconds without any outside help or hindrance. Reminded of this rarely applied regulation, Perez immediately backed away with both hands aloft as if the fighter had suddenly become radioactive, showing the inspector that he intended to act legally from that point forward. McKinley’s quick thinking likely saved his fighter’s perfect record.

What happened next was nothing short of remarkable. After absorbing a pile-driver that would have made Jerry “The King” Lawler proud – and would have incapacitated most people — Robinson rolled forward onto a blue tray that stored Perez’s tools of the trade. After a few moments Robinson rocked forward, used his gloves to give himself a solid base and pushed himself to his feet. He turned toward the ring steps and started to walk up.

While his mind appeared to be fully functional his limbs hadn’t quite caught up as his slightly hyper-extended left knee proved as he took his first tentative step up the stairs. His second, third and fourth steps were far steadier, though he had some understandable difficulty ducking between the second and third strands of ropes. Unbelievably, Robinson had re-entered the ring with plenty of time to spare, for referee James Howe had just finished tolling “eleven.”

After getting over my initial shock, I tapped the floor with my left foot. It was solid concrete. While I had suspected Robinson had landed head-first, my fears weren’t confirmed until I saw the replay on the monitor a few minutes later. Given what had just happened, it was incredible that Robinson was conscious, much less back in the ring and staring into Howe’s eyes.

Howe took a couple of seconds to assess Robinson’s condition before deciding to wave off the fight. Some have criticized the referee’s quick trigger and if one bases that opinion solely on Robinson’s facial expression they have a point. His gaze appeared strong and steady. But I believe the key to Howe’s decision hung on how Robinson’s legs acted immediately after re-entering the ring. His left leg still hadn’t regained full function and Robinson tried to conceal that by shuffling it forward a few inches. Slightly off-balance, his right foot struck the canvas with unusual heaviness, turning a potential stride into a tell-tale stumble. With that evidence laid before him, and a split-second to make his decision, Howe erred on the side of caution and stopped the fight. As he led Robinson to his corner, he could be seen saying “I can’t do it…I can’t do it.” And he was right – he shouldn’t have done it.

A referee is supposed to do two things: Enforce the rules and ensure the fighters’ safety. Howe’s actions during a highly unusual situation fulfilled both mandates. Some referees might have counted Robinson out the moment he reached “ten,” but Howe knew to give the fighter the extra 10 seconds to re-enter the ring. As for the stoppage, that’s purely a judgment call.

Those who disagree with Howe’s decision could point to a fact Showtime analyst Steve Farhood cited during the broadcast: According to Boxrec.com, Howe’s refereeing career consisted of just three four round fights during a May 29, 2010 card in Toledo. They also can hearken back to the glory days of boxing when referees gave fighters like Matthew Saad Muhammad, Kelvin Seabrooks and Bobby Chacon more than the benefit of the doubt when they were badly hurt. While I can see the wisdom of that argument, I don’t think it should have applied here.

The CompuBox stats offered further support for Howe’s position. Up until the moment of the knockout Imam had been brilliant. When Robinson was fully functional Imam landed 40% of his total punches, 35% of his jabs and 46% of his power punches and out-landed Robinson at a nearly 2-to-1 clip (109-57 overall, 45-21 jabs, 64-36 power). If Imam had been that effective when Robinson was at his best, how much more so would he have been against a Robinson who had just absorbed a bomb to the temple and had just taken a head-first fall onto a concrete floor? It was a miracle that Robinson even made it back into the ring, so why tempt fate by allowing him to take even one more punch from a man who had already proven he could land one with above-average regularity and impact? Howe clearly took those factors into account and, in my view, he did the right – and humane – thing. 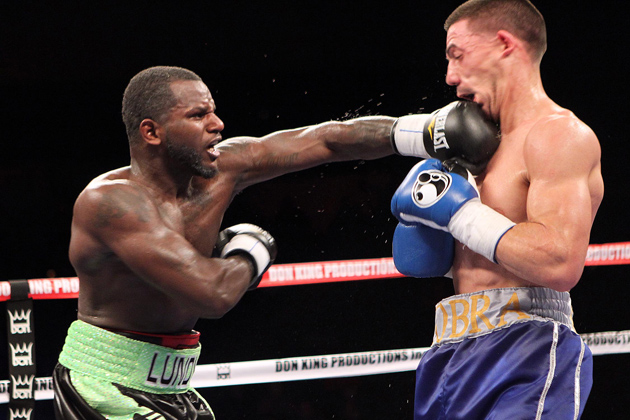 Talk about déjà vu. The last time Angelo Santana graced a prize ring last April, he boxed on a ShoBox-televised card against southpaw Bahodir Mamadjonov, a late sub for Carlos Cardenas, moments after Amir Imam scored a sensational one-punch knockout over Jeremy Bryan. Following a quick start that included a flash knockdown in round two, Santana eventually fell victim to Mamadjonov’s superior boxing skills to the point that he eventually suffered late-round knockdowns against the moderate-hitting opponent (nine KO in 15 previous wins). One knockdown in the eighth and two more in the ninth sealed Santana’s doom and took away his undefeated record.

So what happened the next time out of the box? Santana boxed on a ShoBox-televised card against switch-hitting Hank Lundy, a late sub for Mark Davis, moments after Amir Imam scored a sensational one-punch knockout over Jared Robinson. Following a quick start that saw Santana out-land Lundy 28-18 overall and 28-10 in power shots, Santana eventually fell victim to Lundy’s superior boxing skills, which included switching to lefty starting in round two. Like Mamadjonov, Lundy, an even lighter hitter with 11 KO in 23 previous wins, scored a knockdown in the ninth to seal a lopsided unanimous decision victory that revived his career while sinking Santana’s.

If Santana chooses to continue boxing, he’d better make sure of three things. One: Stay away from light-hitting lefties. Two: Be certain that Amir Imam and his rock-like fists are nowhere to be seen. And three: If a camera has a Showtime logo on it, confiscate it.

To me, the result was hardly a surprise. While Lundy may have a suspect chin – knockdowns against John Molina (KO by 11), David Diaz (KO 6) and Dannie Williams (W 10) attest to that – “Hammerin’ Hank” is an excellent all-around fighter armed with supreme self-confidence. Many fighters aspire to become expert switch-hitters but Lundy is one of the few who has actually mastered it. Lundy fights so fluidly out of the lefty stance that one has to question whether he’s a closet southpaw. Only an autograph request would answer that query.

Once the show ended, Aris and I headed toward the production office to grab a couple of slices of pizza and some sodas and my partner ably guided me back to the Hyatt. It was now after 1 a.m. and it took quite a while for me to wind down enough to turn out the lights for good.

Saturday, Feb. 22: I could have slept longer but because I knew much needed to be done once I got home I opted to wake up after five-and-a-half hours of pretty solid slumber. After getting ready for the day I opened the curtains and smiled at the sunshine and cloudless skies that greeted me.

But it wasn’t until I stepped outside to retrieve my car that I felt the blustery winds coming off Lake Erie. They were strong enough to nearly knock me off balance and they provided noticeable resistance as my car cut through the air. The temperature was a seasonable 37 degrees but it felt much colder. In a nutshell, that’s Cleveland in February. Traffic was light and within five minutes I was on I-77 South.

When I reached Cambridge a little less than two hours into the trip, I decided to stop and get some lunch. As I left my car I was hit with a wave of far warmer air – nearly 60 degrees’ worth. Eager to get home, I decided to get my order to go.

I pulled into the driveway a little after 1:30 p.m. and as soon as I finished unpacking I started to tackle all of the work that demanded my attention: Sorting out and recording receipts, compiling more CompuBox-related research and getting a start on the video work that needs to be done in fairly short order. That’s because my next trip will begin almost as soon as this one ended, for on Thursday the Travelin’ Man will return to Verona, N.Y. to work a Showtime-televised quadruple-header topped by J’Leon Love-Vladine Biosse.

Until then, happy trails.

Lee Groves is a boxing writer and historian based in Friendly, W.Va. He is a full member of the BWAA, from which he has won 10 writing awards, including seven in the last two years. He has been an elector for the International Boxing Hall of Fame since 2001 and is also a writer, researcher and punch-counter for CompuBox, Inc. He is the author of “Tales From the Vault: A Celebration of 100 Boxing Closet Classics. To order, please visit Amazon.com or e-mail the author at [email protected] to arrange for autographed copies.