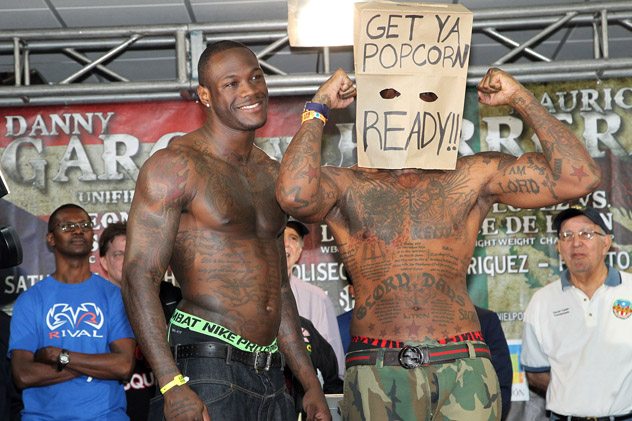 RingTV.com has live round-by-round update of tonight's WBC heavyweight title eliminator during which Deontay Wilder (31-0, 31 KOs) knocked out Malik Scott (36-2-1, 13 KOs) with a straight right hand after a left hook to the temple at 96 seconds into the fight.

Although it appeared to be partially blocked, Wilder's right hand followed a left and appeared to pierce the highly-held guard of Scott. It apparently had the momentum to cause enough damage that Scott could not beat the count of referee Roberto Ramirez Jr.

In victory, Wilder became the mandatory challenger to the Bermane Stiverne-Chris Arreola rematch.

Although the 6-foot-7 Wilder, who is 28, once recruited the 6-foot-4 Scott, 33, as a sparring partner in advance of his first-round knockout of ex-beltholder Sergei Liakhovich in August of last year, the 2008 bronze medalist said they never broached the notion of one day being adversaries.

Round 1: Fighters at ring center. Scott circling, Wilder, pressuring. A lot of posturing. Al Bernstein calls Scott's approach, "The four-corner offense" as he moves around. Double-jab by Wilder. Crowd's booing. A third and a fourth jab and a fifth and sixth by Wilder. STRAIGHT RIGHT HAND AFTER A LEFT HOOK DROPS SCOTT AND THE 1:36 MARK IT'S OVER!!!!!