Mauricio Herrera confident as the underdog vs. Danny Garcia 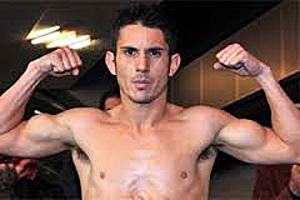 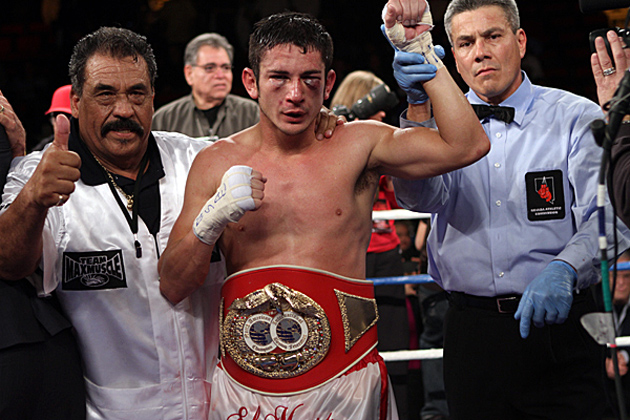 Mauricio Herrera was bruised but unbowed after upsetting hard-punching Ruslan Provodnikov in 2011.

Mauricio Herrera sure likes being the underdog, doesn’t he?

Instead of worrying about what might go wrong in his 12-round bout against junior welterweight champ Danny Garcia on Saturday, he epitomizes the phrase, “cool, calm, and collected.”

And why wouldn’t he be? Herrera’s already defeated one of the toughest and most feared fighters in boxing.

Few gave him any chance of winning when he stepped inside the ring against Ruslan Provodnikov in January of 2011. But despite losing most of the first half of the bout and having to deal with a broken orbital bone below his left eye, Herrera outboxed the hard-hitting Russian to win a unanimous decision.

Still Herrera enters Saturday’s fight, which takes place at the Coliseo Ruben Rodriguez in Bayamon, Puerto Rico, as a big underdog once again. The bout will headline a Golden Boy Promotions card and will air live on Showtime, starting at 9:00 p.m. ET/ 6:00 p.m. PT.

Herrera has had modest success since turning pro over six and a half years ago at the advanced age of 27. In recent years, he’s faced some of the best fighters in his weight class – including Mike Alvarado, Karim Mayfield, Mike Dallas Jr., and Ji-Hoon Kim.

Despite having suffered two recent consecutive defeats – 10-round decisions to Alvarado and Mayfield – which were then followed by two consecutive victories, Herrera is riding the victory over Provodnikov for what it is worth.

“The Provodnikov fight was something that changed my life,” Herrera told RingTV.com in a recent telephone interview. “It taught me to be more relaxed going into a fight. I’m actually treating this (Garcia) fight like another fight. Outside of the gym, I don’t even think about it and I think that has allowed me to be more focused and motivated.

“At the same time, Danny has the belts and I’m very motivated. I see him as a good all-around fighter. He’s a smart fighter, but he makes mistakes. I’m going to capitalize on those mistakes. We’ve got something special for Danny.”

According to Herrera (20-3, 7 knokcouts), who hails from Riverside, over an hour’s drive east of Los Angeles, he was offered a fight against Garcia in 2011, but fought Dallas instead. After winning a close decision against Dallas, Herrera lost to Alvarado and Mayfield in his next two fights, his only bouts of 2012.

He was disappointed in his performance against Mayfield because he did not stick to a game plan, and instead fought outside of his element. He says he has learned from those mistakes and vows to take advantage of the opportunity of fighting for two world title belts.

“I didn’t want to lose, but the Mayfield and Alvarado fights were probably meant to be to get me to where I’m at right now,” said Herrera, who inked a promotional contract with Golden Boy Promotions after fighting under the Thompson Boxing Promotions banner for most of his career. “I accepted what happened and now I’ve been given this opportunity. Things have fallen in place and it was meant to happen that way. In losing those fights, I believe I gained something and that is fighting Danny Garcia on Saturday night.”

Herrera is a likable guy outside of the ring. He has persevered through bad decisions (against Mike Anchondo), injuries, and critics who believe he is not an A-level fighter. For those reasons, Herrera is very familiar with the underdog term.

It motivates him that much more in the gym, where he admits he thinks about Garcia so much that his trainers have to tell him to scale back on the amount of work he puts in.

Should he lose on Saturday night against Garcia, it could be his last opportunity at a world title belt. One would think a fighter in Herrera’s shoes would be nervous or feel added pressure.

But that is not him. Instead, Herrera brings a “nothing to lose” mentality into the fight. According to Herrera, if it worked for Garcia, why couldn’t it work for him?

“Why can’t I be a world champ?” said Herrera, whose nickname is “El Maestro” (which means “Teacher” in Spanish). “Why can’t I have a world title? That’s my mentality and I’m sure he had that mentality before he won a world title. He worked hard to get it, but I feel Danny is a different fighter now compared to when he was a contender. Maybe he wants to prove something to the Puerto Rican people and fights outside of his element. If that’s the case, it’ll play into my hands.”

Whatever obstacle Herrera faces on Saturday night, he’s comfortable that he will find a way to overcome it. It is who he is and usually those fighters are the most dangerous.

“I guarantee I will give it my all on Saturday night,” he said. “Anything can happen in boxing. I’ve proven that before and I’m confident I can do it again.”