In the April issue: Marco Antonio Barrera’s ‘Best I Faced’ 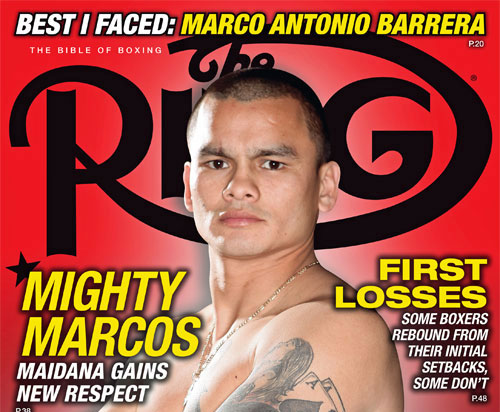 Whether you're talking about a single era in boxing or Mexico's entire history of fighters, Marco Antonio Barrera was one of the best. Just as important, he was a fan favorite because of his string of entertaining brawls.

The “Baby Faced Assassin” took on a who’s who of the best fighters from 112 to 140 pounds in a career that spanned more than 20 years, winning four world titles and going 21-4 in championship fights along the way to establish hall of fame credentials.

Barrera, who turned pro at 15, won the first 43 fights of his career. That includes a victory over Daniel Jimenez to win the WBO junior featherweight title in 1995 and eight successful defenses.

Then he ran into trouble, losing his title and consecutive fights to the slick Junior Jones in 1996 and 1997. Many believed at that time that the Mexican warrior, who had been in a number of taxing battles, was finished as an elite fighter.

They were wrong. Barrera reinvented himself as more of a boxer than a slugger and went on to record some of his most important victories. Of course, that includes two victories in his classic trilogy with countryman Erik Morales between 2000 and 2004.

Barrera also beat the likes of Naseem Hamed, Johnny Tapia, Kevin Kelley and Paulie Ayala but lost twice to Manny Pacquiao and once to Juan Manuel Marquez. He dominated the popular Hamed, who was unbeaten and favored going into their 2001 fight.

"Definitely the best fight I had and my best victory was against Naseem Hamed," Barrera told THE RING while speaking of the 2001 master class that snapped the Prince's perfect record.

Barrera, now 40, retired in 2011 with a record of 67-7 (44 knockouts) but is still very much involved in boxing. He works as an analyst for TV Azteca, owns a gym in Mexico City and manages several fighters. That includes RING-ranked junior flyweight Moises Fuentes, welterweight Luis Fernando Uribe and unbeaten junior featherweight Daniel Rosas.

THE RING recently caught up with Barrera, who gave us the best he faced in 10 key categories.

To read the rest of this story — including the best Barrera faced — and other articles in the April 2014 issue of THE RING Magazine, please purchase the issue or subscribe to the magazine — both the print and digital versions — by clicking here. The current issue of the magazine also is available on newsstands.