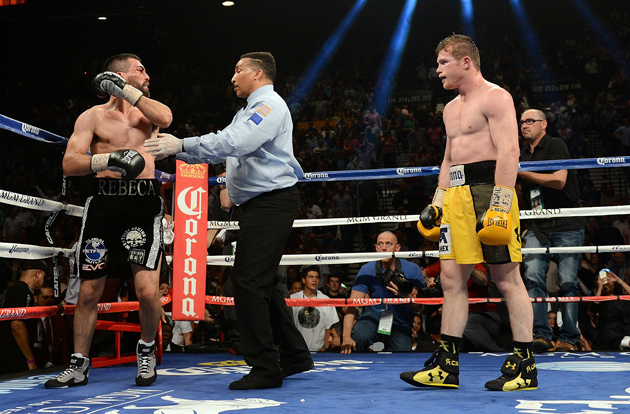 The 49-year-old IBF titleholder shared his thoughts with RingTV.com while at the W Hotel in downtown Washington, DC., on Tuesday to tout his April 19 unification bout with WBA counterpart Beibut Shumenov scheduled for the D.C. Armory on Showtime.

An angry Angulo remained defiant after Saturday night's loss during an interview with RingTV.com on Sunday. Weeks defended his actions during a separate report by RingTV.com.

"I thought it was a good stoppage," said Hopkins. "[The action] leading up to the stoppage justified why they should have stopped the fight. I think it was a good call because he was not responding well as far as defending himself."

Last month, Hopkins was in D.C. for a summit during which he shared his thoughts on fighter brain health and safety at the United States Capitol, an event that was organized by The Lou Ruvo Center for Brain Health, which has engaged in the most comprehensive study on professional boxers and the effect boxing has on thier brains to date.

The brain health event occurred one day after the death of featherweight boxer Oscar Gonzalez as a result of brain injuries he suffered during a 10th-round knockout loss to Jesus Galicia in Mexico City.

Baltimore cruiserweight Venroy July (16-1-2, 6 KOs) will pursue his fourth straight win against Quantis Graves (9-0-1, 4 KOs) on April 12 at The Patapsco Arena in Baltimore.