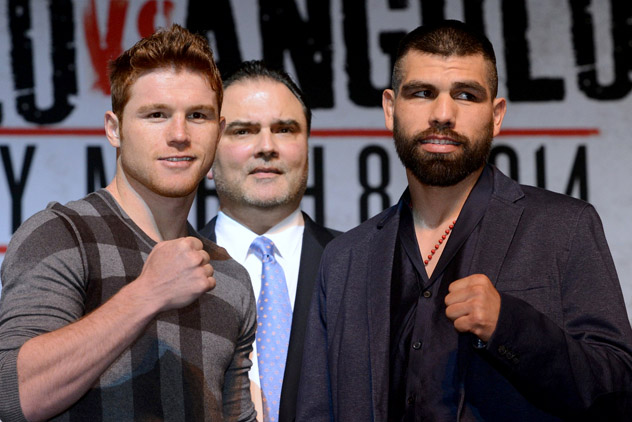 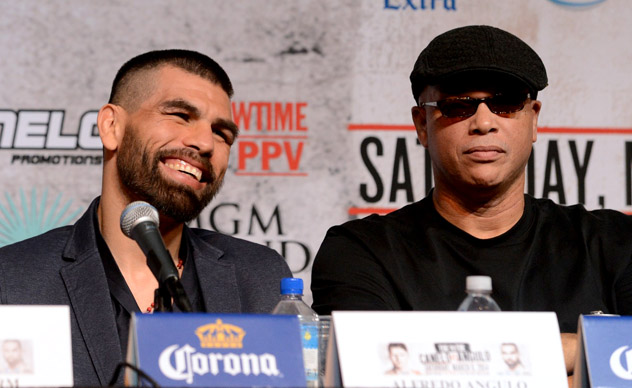 Trainer Virgil Hunter said he envisions "a savage affair" in Saturday's 154-pound bout between his fighter, Alfredo Angulo, and Canelo Alvarez at the MGM Grand In Las Vegas.

Hunter made this statement during Thursday's final press conference for the fight at the Hollywood Theatre inside the MGM.

"I've had a couple of weeks to reflect on this event that is coming up, and I know that the motto has been toe-to-toe, but I just have this feeling that I don't think that both men will walk out of the ring the same on Saturday night," said Hunter, whose counterpart in Alvarez's corner is Chepo Reynoso.

Alvarez, the former RING and WBC 154-pound champ, and Angulo are both attempting to rebound from losses.

Alvarez is coming off a majority-decision loss to Floyd Mayweather Jr. in September, and Angulo scored two knockdowns during a brutal and dramatic 10th-round stoppage loss to Erislandy Lara in June.

Of Alvarez, Angulo has stated that he is "ready to chase him or fight him like a true Mexican warrior," adding, "I plan to test him like he's never been tested before. I don't think anyone has ever hit Canelo as hard as I'm going to hit him."

Alvarez called Angulo "a difficult challenge because he's a fighter who can punch and take a great punch," even as he said, "I'm the strongest."

That, said Hunter, remains to be seen.

"It's kind of bothering me, but at the same time, I hope that I can rise to the occasion, and that my fighter will walk out of that ring intact and be ready for more future fights, and I'm also hoping that Team Canelo can do the same. But it's just something about this fight that is probably going exceed anything that we've seen before, and I'll just leave it at that."

Gerald Washington will pursue his fourth straight stoppage win against Skipp Scott on April 3 at Fantasy Springs Resort Casino in Indio, Calif., on Fox Sports and Fox Deportes on a Golden Boy Live! show entitled "The Night of The Heavyweights."

A 34-year-old southpaw who stands 6-foot-4, Ortiz scored his fifth consecutive knockout against Alex Gonzalez in his last fight.