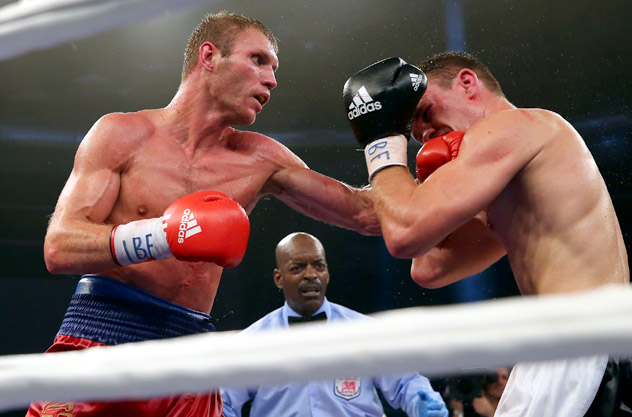 Main Events won the purse bid for the eliminator, which could grant the winner a shot at IBF titleholder Bernard Hopkins, who will face WBA counterpart Beibut Shumenov on April 19.

"Sukhotsky versus Dudchenko is going to be a war that deserves this kind of exposure in the United States," said Duva, whose stable also includes WBO 175-pound beltholder Sergey Kovalev.

"The winner will be in line to challenge Bernard Hopkins for the IBF light heavyweight championship, so it's great that fight fans will get to see this eliminator."

A 32-year-old who will be in search of his fourth straight stoppage in as many consecutive victories, Sukhotsky (21-2, 16 knockouts) is coming off a fifth-round knockout of Eduard Gutknecht in November.

Sukhotsky's other loss was by unanimous decision to Juergen Braehmer in a failed bid to earn the WBO's belt in December 2009.

Nicknamed "The Gladiator," Dudchenko is coming off a unanimous decision over previously unbeaten Robert Woge in October and is being trained by former heavyweight titleholder Chris Byrd.

For the main event, the 41-year-old southpaw Mansour (20-0, 15 knockouts) has won four of his past fight fights by stoppage, and was last in the ring for a seventh-round knockout of Kelvin Price in December.

At 6-1, Mansour is two inches shorter than Cunningham (26-6, 12 KOs), a 37-year-old who is coming off December's unanimous decision over Manuel Quezada that helped him to rebound from a seventh-round stoppage loss to Tyson Fury. Cunningham floored in the second round in April.

At 210 pounds, Cunningham could be out-weighed by as much as 20 pounds by Mansour. Cunningham is 2-4 in his past six bouts.