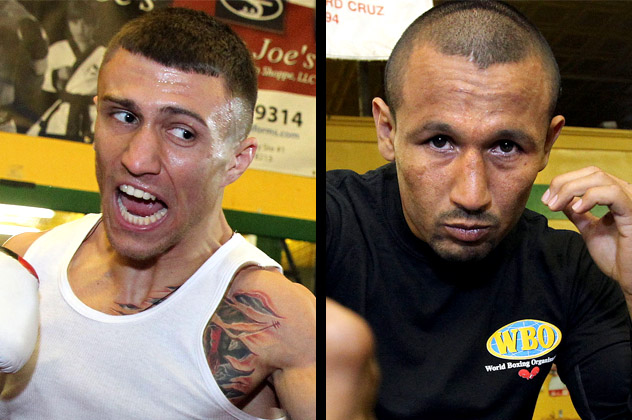 While Julio Cesar Chavez Jr. made weight for Saturday's 168-pound return bout with Bryan Vera, Orlando Salido failed to make featherweight, losing his WBO 126-pound belt at the scales as well as $15,000 of his purse to rival Vasyl Lomachenko.

Chavez (47-1-1, 32 knockouts) and Vera (23-7, 14 KOs) each weighed 167.5 pounds for their return bout at the Alamodome in San Antonio, Texas, which is an HBO-televised rematch of Chavez's controversial unanimous-decision win in September.

Vera's initial bout with Chavez took place in Carson, Calif., at a 173-pound catchweight because Chavez was not able to make the originally contracted 168-pound limit. Chavez was set to be fined $250,00 had he failed to make weight, yet again.

Salido came in at an overweight 128.25 pounds compared to 125.5 for Lomachenko, who will get $15,000 of the former titleholder's purse, according to Sean Gibbons, Salido's representative with Zanfer Promotions.

"Orlando turned professional at this weight, and for whatever reason, he's just hit the wall," Gibbons said of Salido, who had informed RingTV.com that Lomanchenko represented his "last fight" at 126 pounds. "When, and if Orlando is successful, we'll be moving up to 130. We'll, hopefully, challenge for one of those belts in that division."

"Wow! If he couldn't make the weight, then he lost the title on the scale," said Valcarcel. "If the other kid made the weight, the Lomancheko will be the champion. If Salido wins, then the title will be vacant."