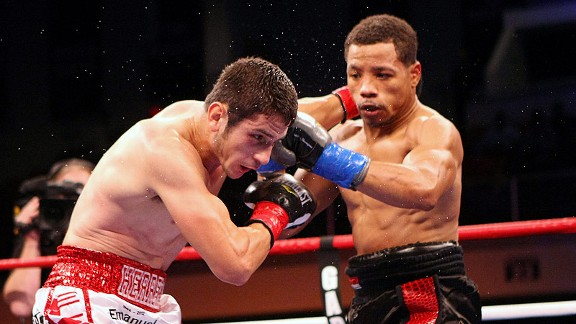 HBO's Boxing After Dark card is set for March 29.

Karim Mayfield will battle Thomas Dulorme in the televised co-feature to Sergey Kovalev's title defense against Cedric Agnew from Atlantic City, N.J. The winner of the bout should be in line for a notable fight at 140 pounds, and rumors have floated that the victor could meet Ruslan Provodnikov.

"My style is to always go for the knockout and wear down my opponent," Mayfield, 33, said in a press release Tuesday. "I've seen Dulorme fight and he's got good skills, but I'm a whole different animal. He's going to have to withstand my hard hitting style, which is not easy to do. I believe if I can catch him with a good shot on his chin, he's going down."

Mayfield (23-0-1, 21 knockouts) has been in line for a title shot since signing with Top Rank in May 2013. He was linked to a potential bout with WBA beltholder Khabib Allakhverdiev, but the bout never came to fruition.

"I think you have two fighters who are currently B-side guys trying to get to the A-side, and who want to become main stage on premium network televison," Mayfield's manager Marlon Sullivan told RingTV.com last week. "You have one guy who's a boxer, another guy who's a power-puncher, but also a boxer with athletic ability. I think it's an interesting matchup from a style perspective, and I think it should make for a good fight."

"Dulorme, he's definitely had his chin tested before, and that's what Karim "Hard Hitta" Mayfield intends on doing for 10 rounds."

The bout will pit two of the best trainers in the sport against one another. Dulorme, who was stopped by Luis Carlos Abregu in 2010, will fight for the first time under the guidance of 2012 Trainer of the Year Robert Garcia. Mayfield is trained by Virgil Hunter. Dulrome also is coming down from welterweight for the bout.

With a victory, Mayfield should finally get that title shot he's long desired.

"I think (Top Rank) have some fighters that can't get fights right now, some fighters that are being ducked by some of their other fighters. I think Karim is just going to be right there in the mix," Sullivan said. "Once things go as planned, he'll be right there in the mix. You have (Mike) Alvarado, you got Provodnikov who can't find a fight. Of course (Juan Manuel) Marquez. … There's a lot of talent in that stable that he can go ahead and compete against."