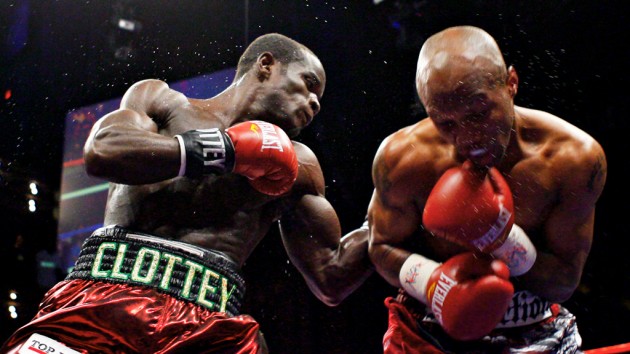 Joshua Clottey is back — again.

The former welterweight titleholder will end yet another hiatus when he takes on Anthony Mundine in Australia on April 2, Clottey told RingTV.com via Twitter on Tuesday. The bout will be contested at junior middleweight, and according to BoxRec.com, will take place at the Entertainment Centre in New South Wales.

"To those asking if I'm in training camp. … I have already been in the gym for four months," Clottey (37-4, 22 knockouts) tweeted. "I knew a fight would present itself and God blessed me. … "(The Mundine camp) contacted us. I said OK no problem lets fight.”

Clottey of Bronx, N.Y., has fought just twice since losing to Manny Pacquiao in March 2010. The 36-year-old has blamed promoter and managerial issues on his lack of activity, but hopes a win over Mundine will get him back in the title picture.

"After the fight I challenge anybody in the top 5 to stop this train," Clottey said during a Q and A session with fans on Twitter. "154 is good weight for me. 147 I was very drain but that was where the names was. I have been in the gym, I am in my prime still."

It remains to be seen if "The Grand Master" is still at his best, but during his height, he was a formidable foe. He was giving Antonio Margarito fits in a 2006 fight before suffering a hand injury, and then lost a highly controversial decision to Miguel Cotto in 2009. His career-best victory came in 2008, when he defeated Zab Judah for the vacant IBF welterweight title.

Mundine is coming off a stoppage victory over Sugar Shane Mosley and will enjoy home-field advantage against Clottey.