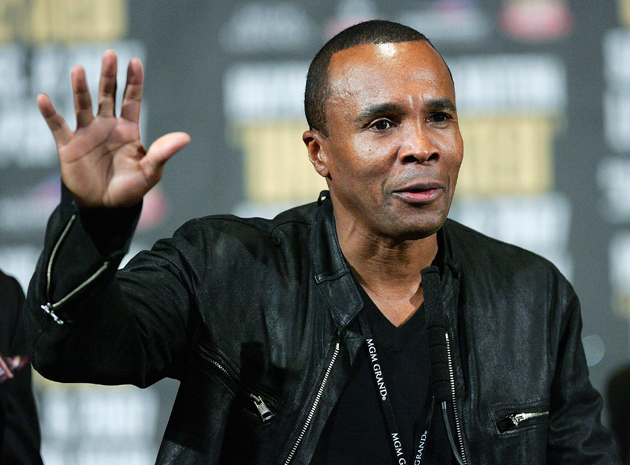 Sugar Ray Leonard speaks at a post-fight news conference after Floyd Mayweather Jr. stopped Ricky Hatton in the 10th round of their RING/WBC welterweight title bout on Dec. 8, 2007, in Las Vegas.

Sugar Ray Leonard is impressed with Floyd Mayweather's success in and out of the ring.

Mayweather ranks as boxing's No. 1 pound-for-pound boxer, was the highest-paid athlete in American sports in 2012 and 2013, and wins fights while simultaneously showcasing younger prospects on the undercards of his own company, Mayweather Promotions.

"I think that his success speaks volumes to the kind of people that he actually has around him, and that he surrounds himself with," Leonard, a five-division champion, told RingTV.com.

"I have heard only good things about him and his promotional business, and it's proof that he's surrounded by true, smart people who know the game, along with a lot of input from Floyd Mayweather himself."

Mayweather (45-0, 26 knockouts), who turns 37 on Feb. 24, will promote his next event on Feb. 28, and could soon name the opponent he will face on May 3 at The MGM Grand in Las Vegas, likely Amir Khan or Marcos Maidana.

Last month, Mayweather spent a few days in South Africa as part of an effort to resuscitate boxing in the nation perhaps with the potential of one day fighting there.

He was last in the ring in September, when he dethroned Canel Alvarez for the RING and WBC 154-pound championships by majority decision. Fought on Showtime Pay Per View, Mayweather-Alvarez became the highest-grossing boxing event of all time with $150 million in revenue reported, eclipsing the $136 million earned by Mayweather’s 2007 victory over Oscar De La Hoya.

An online report by Forbes’ Magazine estimated that Mayweather’s exclusive multi-fight venture with Showtime and its parent company, CBS Corporation, to be worth a guaranteed $250 million .

In May 2013, Mayweather unanimously decisioned Robert Guerrero in defense of the WBC 147-pound title he had earned by dethroning Victor Ortiz via fourth-round stoppage in September of 2011, cementing his status as RING welterweight champion as well. He scored a unanimous decision over Miguel Cotto in May 2012, winning the WBA 154-pound title.

"I think that what Floyd Mayweather is doing is awesome," said Leonard. "It think that it's unprecedented. I'm so proud of him."