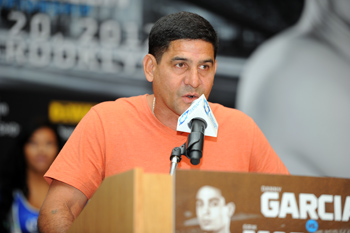 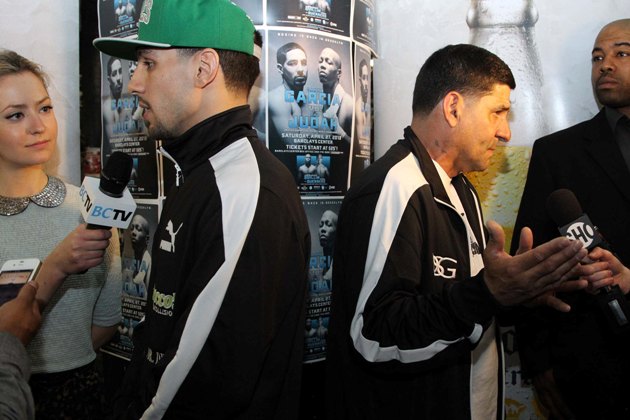 Trainer Angel Garcia shared his thoughts on a potential bout between his son Danny Garcia and Floyd Mayweather Jr., at 147 pounds, as well as his son's RING/WBA/WBC junior welterweight title defense against Mauricio Herrera on March 15 in an Q&A with RingTV.com.

Garcia (27-0, 16 KOs) will face Herrera (20-3, 7 knockouts) on Showtime at the historic Coliseo Ruben Rodriguez in Bayamon, Puerto Rico. The 25-year-old Philadelphia native was last in the ring for a unanimous decision over Lucas Matthysse in the co-featured bout to Mayweather's majority decision over Canelo Alvarez last September.

Garcia fought as an overwhelming underdog against both Khan and Matthysse. A poll of RingTV.com's experts chose Khan to defeat Garcia by a vote of 20-to-1, while the insiders selected Matthysse over Garcia by a margin of 30-4.

"We're training hard, just like we've trained for everybody. It's like as if we were fighting Amir Khan or Lucas Matthysse," said Angel Garcia, a Philadelphia resident who, like his wife, was born in Puerto Rico.

The rest of Angel Garcia's comments are below.

RingTV.com: What sort of performance are you looking for out of Danny?

RingTV.com: Can you break down what you expect to see out of Danny on March 15, and will he score a knockout?

Herrera's fought all kinds of people, but he's never fought a Puerto Rican in Puerto Rico. He fought that Russian guy, whatever his name was — Provodnikov. But that guy just comes.

Everybody's looking at him like he's the greatest fighter in the world, but he's not. So, as I said, you're going to see the champion of the world go out there and be the champ.

Danny's going to look good, and he's going to give the fans what they deserve, which is another great fight and another great performance. Like I said earlier, if Herrera opens up, and he gets fresh, and he doesn't respect the champ, then he's going out of there earlier.

The kid is not a puncher, but we can't underestimate Herrera for that. But on March 15, Danny will still be the undefeated champion of the world.

RingTV.com: What changed from the immediate aftermath of his win over Matthysse, when Danny was saying that he was going up to 147, to now, where he's entering yet another defense of his 140-pound championship?

AG: Well, the thing is that so far, if a fighter sacrifices the right way, then he's not starving himself. The thing is, at 147, one day, we'll be there. Whether or not that will be this year, we don't know.

Anybody can be fat, but you have to work your way into welterweight. That's the way that I look at it as a coach and as a trainer. So Danny will build his way into being a welterweight.

It's not that I'm saying that he can't fight as a welterweight tomorrow and look great, but I want to build him into the welterweight division the right way. I don't want to just run up to 147, if you know what I'm saying.

That happens to a lot of fighters who make mistakes that way. You just can't say that you're bored at 140 and go to 147 just because you want to. You've got to build into that weight division.

Right now, we're worried about March 15, and in the future, when we're ready for 147, then we'll go up there. That's not even the thought in our mind right now.

RingTV.com: Beyond this fight, can you address the potential for facing Mayweather?

AG: Well, the thing is, Floyd is Floyd. Floyd is the guy, and he has fought for that, and he's earned that. I'm not going to take nothing away from him. If Floyd don't want to give us a shot, it's okay, because Danny is trying to build his own legacy.

I'm not mad at him or nothing like that. He's his own man. If one day, he decides to fight Danny, then, you know, it is what it is. Floyd deserves what he's got and he's earned it. We'll just do the same by building our own legacy, and we're taking the right steps to do that.

RingTV.com: Who would you like to see Danny fight beyond Herrera, if not Mayweather?

So I'm not going to put anybody in front of Herrera. We're going to worry about that fight for now. After that, you can ask me that question, but we have a fight on March 15.