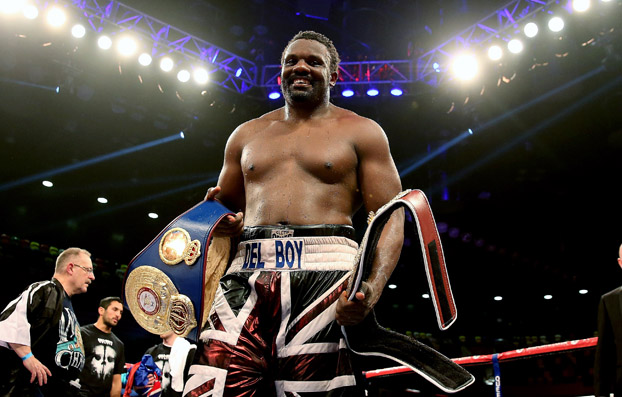 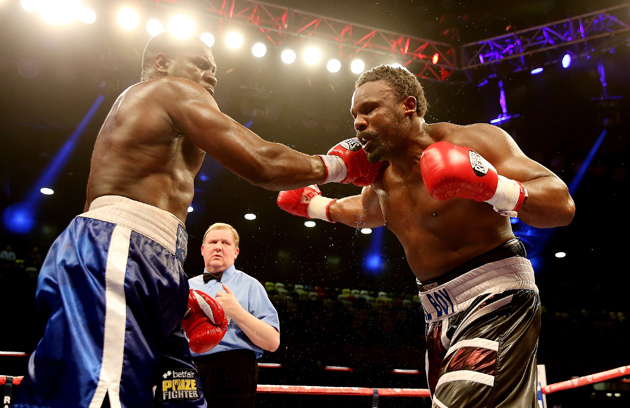 Dereck Chisora (right) charges Kevin Johnson during their heavyweight bout at The Copper Box in London, England, on Feb. 15.

“Del Boy” Chisora, the reigning European champion, managed to deck Johnson with a counter right over the jab in Round 5, but it was a rare moment of excitement in a relatively poor encounter which failed to dazzle.

Chisora, who weighed 238 pounds, told BoxNation, “Credit to Kevin Johnson, because he came to survive. I knew it was going to be a long night and the fight was likely to go 12 rounds. I’m looking to take on Alexander Povetkin in spring, then Tyson Fury in the summer.”

Johnson, 240 pounds, began well with a busy left jab, but nothing of consequence ever followed, and that pattern was maintained for the best part of 36 minutes. Chisora warmed to the task in Round 3 with some powerful right hands which kept the American on the back foot and, in essence, that was the entire fight in a cameo.

Chisora continued to catch the jab at the midway point, but Johnson repeatedly complained about rabbit punches, when he should have been concentrating on throwing shots. The Londoner smartly took advantage of his distracted opponent, tagging him with heavy headshots whenever he could.

Following the knockdown Chisora definitely upped his punch output. He rolled on the way in, provided more of an awkward target and simply had more fire than Johnson, who looked like he would rather be somewhere else. One got the feeling that the action was unlikely to change and the sessions were largely repetitive.

Suddenly two sharp body shots from Johnson looked to trouble Chisora in the ninth, but the moment passed and the listless battle continued. The American fired in a few meaningful blows in the final third of the contest, but it was too little too late and the bout ended with a whimper, as the crowd filed out of the arena in silence.

Since rededicating himself to his craft at the beginning of 2013 Chisora (20-4, 13 knockouts) has been on excellent form. This was his fifth straight victory, but there were no fireworks on this occasion, and once sensed that he was a little disappointed with how the fight unfolded.

The Londoner shouldn’t be too hard on himself because Johnson has never been stopped, despite having been in with both Fury and Vitali Klitschko. Still, it’s also worth mentioning that the American replaced Andriy Rudenko and took the fight on only three weeks notice.

Despite mentioning Povetkin the next big fight for Chisora is likely to be Fury, who defeated the 30 year old Chisora in 2011. “Del Boy” has always maintained that conditioning, rather than ability, let him down on that hot London night, and he is determined to get revenge over his charismatic rival.

Promoter Frank Warren told BoxNation, “We’ll see what happens in April for Dereck, but we’re looking to set up the big one with Tyson Fury in the summer. That’s the one everyone wants.”