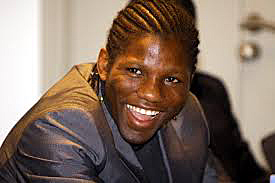 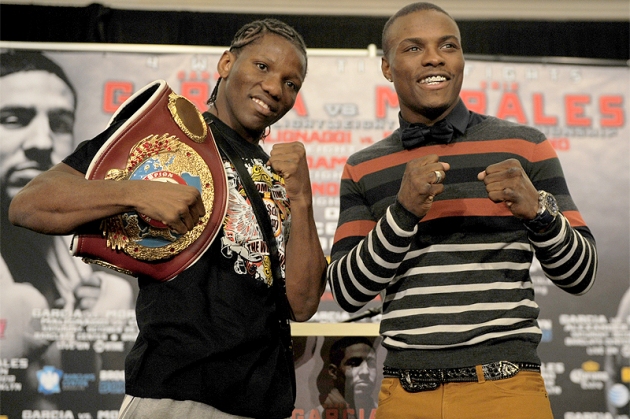 Late last year Hassan N’dam N’Jikam returned to boxing from a 14-month sabbatical to win a comfortable 10-round decision over journeyman Anthony Fitzgerald.

Now that he’s shook off the ring rust, N’dam (28-1, 17 knockouts) will be back in action today when he takes on Ricardo Marcelo Ramallo in Dublin, Ireland.

Though N’dam, a former WBO middleweight beltholder who turns 30 a few days after this weekend’s outing, lost for the first and only time in his professional career against Peter Quillin in his American debut in October 2012 but he showed considerable heart to get off the canvas six times en route to dropping a spirited unanimous decision.

N’dam spoke with RingTV.com late Thursday night via email. Here’s what he had to say on a variety of subjects.

Anson Wainwright – On Saturday you will be fighting in Dublin. What are your thoughts on your fight and appearing in Ireland?

Hassan N’dam N’Jikam – It is very good to fight in Ireland because my manager is Irish and also a good opportunity because we are international boxers and to make ourselves known to the whole world.

AW – You returned from a long period out of the ring last December to outpoint Anthony Fitzgerald. Can you tell us about that fight?

HNN – For me the fight against Fitzgerald, returning to the boxing ring after one long period of inactivity, we passed (the test) with brilliance. I started with a new team.

AW – Why were you inactive after the Quillin fight for 14 months?

HNN – Because I wanted change in my manager. I had passed a stage and I wanted to change my team because my former promoter had too many twists (and turns) in my fight against Quillin, then I decided to renew my team and I took my time not to make the same mistake.

HNN – First my team consists of my manager Gary Hyde, my trainer, as always, is Mustapha Ouicher and about my new promoter – we’ll know more soon.

I train generally in Pantin (France) and my training camps are different for each fight. For this fight my training camp was based in Cork (Ireland) at Gary’s gym. (Guillermo) Rigondeaux has trained there and I did sparring with too many prospects like Mark Heffron and others.

AW – You were a good amateur boxer; you fought in the 2004 Olympics. Could you tell us about your amateur career and what titles and tournaments you won?

HNN – I had a very active amateur career with 89 fights. I was African champion, junior and senior, a quarterfinalist in the world championships, junior silver medal in the All-African games in Abuja, and a quarterfinalist at the Olympic Games, where I beat Andy Lee, who is a great Irish fighter at the moment.

AW – Though you now live in France you were born in Cameroon. Could you tell us about what life was like growing up there and how you came to move to France?

HNN – I was born in Cameroon but after (the) Olympic Games I wanted to be (a) professional boxer. In Cameroon it’s impossible because of structure. That’s why I decided to travel to another country. I choose France because of (the) language. It would be easier for me to learn my job (professional boxing) and have a great career. All my plans passed like I hoped.

AW – Cameroon isn’t known for its boxers, more for soccer players. How did you first become interested and then take up boxing?

HNN – Like I always say, I have a currency “Only the ring speak,” and if you win there will be talk about you around the world, not only in Cameroon.

AW – Could you tell us about yourself as a person and about your life away from boxing?

HNN – For myself, I am always smiling, joking, and serious in my business. I love my family, friends and baby. My hobby is dancing and sometimes singing. I love boxing and great fights. I want to organise one (boxing card) in my country for young boxers but am finding it hard like people told me.

AW – The middleweight division is blessed with a lot of talent. What do you think of the division and where you fit in? Who are you targeting?

HNN – I think I am blessed to be a middleweight and have a talent to fight all the great fighters of that division. Today we have a plan with my manager to fight the best of that division and beat them. For me, today the best is “GGG” (Gennady Golovkin), but anybody who will face me will be punished.

AW – Boxing in France isn’t what it once was. TV doesn’t back the promoters and so there are less shows. How do you feel this has affected your career?

HNN – It has not affected my career because I am French but I am an international fighter so I will fight anywhere and with my manager and promoter we began our job.

AW – Growing up who were your boxing heroes?

HNN – My boxing hero is Muhammad Ali who will stay the greatest of the world.

AW – In closing do you have a message for the middleweight division?

HNN – Hassan N’dam is coming back to take all the titles.