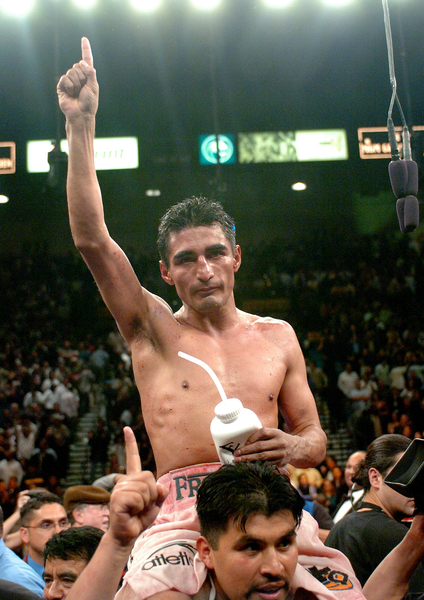 Erik Morales was left in a heap when last in action, having been flattened by a head-swiveling, body-twisting left hook that earned RING junior welterweight champion Danny Garcia a fourth-round knockout in October 2012.

The loss was Morales second straight to Garcia, a winner by unanimous decision in their previous bout in March 2012, and his third setback in four bouts.

And during a Wednesday telephone conversation with RingTV.com from Monterrey, the 37-year-old four-division titlewinner insisted that he's far from washed up.

"I know that people have their opinion on who I am, but I will continue to show them," Morales said via translation from Mexico-based promoter Fernando Beltran. "I think this is a fight where everybody's got their right to have their opinion, but I plan to prove a lot of people wrong."

Before falling to Garcia the first time, Morales became Mexico’s first fighter to win four belts over as many different weight classes with a 10th-round TKO over the previously unbeaten Pablo Cesar Cano in September 2011.

Five months earlier, Morales' lost a disputed majority decision to Marco Maidana, his efforts in that bout later receiving notoriety for RingTV.com's 2011 Comeback Of The Year.

Morales had blamed his first loss to Garcia, during which he was dropped in the 11th round, on the gall bladder surgery he endured in December 2011.

As a result of the surgery, Morales had withdrawn from his originally scheduled match up with Garcia that was slated for January 2012 and came in overweight for their return bout at 142 pounds.

"I made a few mistakes for my last fight, but at the end of this fight, I will invite everybody to express their opinions about it after the fight," said Morales. "I know that I have a lot of fights go in my favor where I went in and proved people wrong and this is going to be another one of those."

Although Morales failed the first two of three pre-fight drug tests by United States Anti-Doping Agency, he was, nevertheless, allowed by the New York State Athletic Commission to compete against Garcia.

Having tested positive for the banned weight loss drug Clenbuteral, Morales was barred from competing for two years by USADA — a ruling carried no weight in Mexico.

Morales' resume has been highlighted by his winning one of three bouts in separate trilogies with Manny Pacquiao and Marco Antonio Barrera.