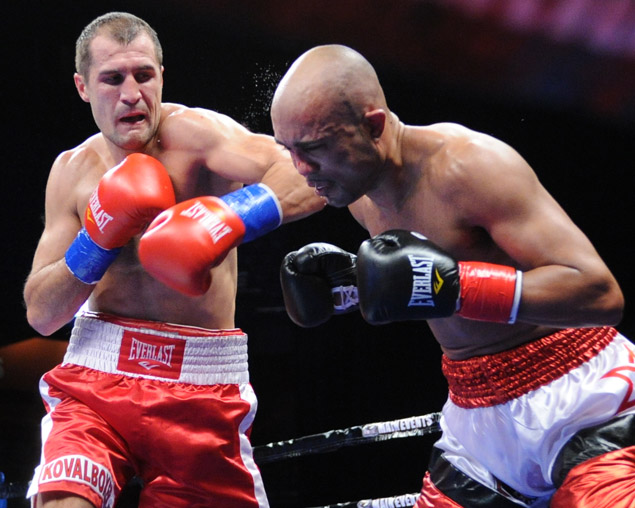 Sergey Kovalev will defend his WBO light heavyweight title on March 29 against Chicago's Cedric Agnew at the Adrian Phillips Ballroom at Boardwalk Hall in Atlantic City, N.J., Main Events' President Kathy Duva informed RingTV.com on Tuesday. The bout will be televised on HBO.

"I am excited to be back on HBO and for my first fight at Boardwalk Hall," Kovalev said in a statement. "I promise to put on an exciting show."

A 30-year-old puncher from Chelaybinsk, Russia, Kovalev (23-0-1, 21 knockouts) was last in the ring in November, when he scored a second-round knockout of Ismayl Sillakh on the undercard of Adonis Stevenson's sixth-round knockout of Tony Bellew in defense of his RING and WBC championships from The Pepsi Colesium in Quebec City.

"I think that the audience is going to be fight fans, and I don't know that they necessarily have to be Russian or Slavic. I think that some of them will be, of course. But I think that this is the kind of guy that draws a lot of people," Duva told RingTV.com.

"I think that you're going to see the same kinds of audiences that you see at Gennady Golovkin's fights. This is somebody who, when you go there, you can't blink, because it could end quickly. You're going to be happy to pay to watch a couple of rounds. I really think that you haven't had a guy who attracts that type of excitement since probably Mike Tyson."

Agnew (26-0, 13 KOs), who is 27, is coming off a unanimous decision over former title challenger Yusaf Mack last April.

If Stevenson defeats Fonfara, and Kovalev is successful against Agnew, Duva and Stevenson's promoter, Yvon Michel, said the duo could be matched "at the end of the summer or early fall."

Kovalev is 11-0-1 with 11 stoppage victories in his past 12 bouts. Bellew represented the 10th straight knockout for Stevenson and the fourth of 2013 for the 36-year-old southpaw.

"Obviously, that's where everybody wants to go, but Sergey has got to fight Cedric Agnew on March 29, so that's the fight he's going to focus on…We're thrilled that we're able to bring Sergey to Atlantic City where we have been so successful in the past. You can't miss a second of a Kovalev fight," said Duva.

"There's so much tension in the ring. You're almost guaranteed to see an incredible knock out. I'm thrilled that Cedric Agnew stepped up to fight Sergey. For an undefeated young fighter to take a fight that it seems no one else wants, that really says a lot about him. I'm sure he'll be prepared come fight night and Kovalev will have a tough challenge in front of him."