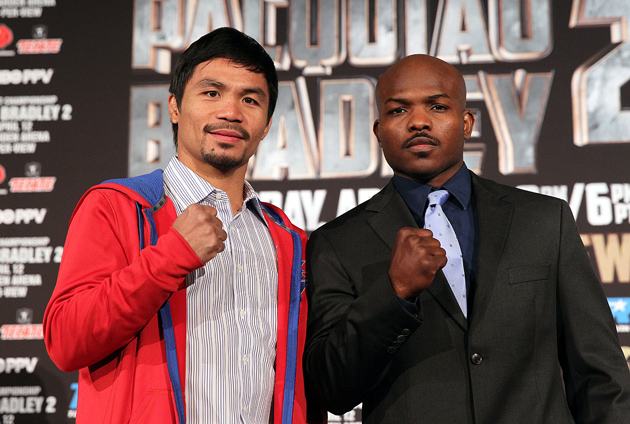 Manny Pacquiao promised to bring back his "killer instinct" for his April 12 rematch with WBO welterweight titleholder Timothy Bradley, who responded that he was "excited" and "embraces the challenge" of making the third defense of the belt he took from Pacquiao with a controversial decision in June 2012.

Pacquiao and Bradley made their comments during a Thursday press conference in New York in advance of their HBO Pay Per View televised bout at The MGM Grand in Las Vegas, site of Bradley's triumph that many consider to be among the most controversial big fight outcomes in many years.

Pacquiao (54-5-2, 38 knockouts), who turned 35 in December, rebounded from the setback against Bradley and a knockout loss to Juan Manuel Marquez in December of 2012 by easily outpointing Brandon Rios last November.

But during an interview with Yahoo!Sports, Bradley questioned Pacquiao's resolve against Rios.

"Manny didn't look the same against Rios. He didn't have his usual killer instinct," said Bradley. "That's the first thing I noticed. I don't think he has the hunger anymore and it's never coming back. He no longer has his killer instinct."

Pacquiao picked up on that notion on Thursday.

"What Bradley has been saying to me is that the killer instinct and the aggressiveness is not [there] anymore, and that I don't have that anymore. So that's what I'm trying to prove this fight on April 12. I think that he's right. Maybe I'm just too kind and too nice to my opponents sometimes in the ring," said Pacquiao.

"Yes, I'm just too kind and too nice to my opponents sometimes in the ring, and that's why you can not see the aggressiveness and the killer instinct. But this time around, I have to get it back and show that I still have that aggressiveness and that killer instinct…To all the people who love boxing, don't miss this fight. It's going to be more action in the ring and you're going to see, in both of us, a young Manny Pacquiao and a young Tim Bradley in the ring."

"I can't wait. Oh, I can't wait. Manny says he's going to be the aggressive, destructive Manny Pacquiao of old times, and I get excited because I embrace the challenge and I love challenges. I love when people say that I can't do something, because I love to prove them all wrong, like I've been doing my whole career. I know I'm going to be the underdog, even though I'm the champion. I know it," said Bradley, who reportedly fractured his left foot and sprained his right foot in the first bout.

"I want to be the underdog, because I'm still set out to prove that I'm one of the best fighters in the world. I know the first time around, no one believed that I won that fight against Manny Pacquiao, but the second time around, I have to make it more decisive in everybody's eyes, including you guys, when I win this second fight. I can't wait. This next eight weeks of training is going to be hell, and I can't wait to get in there and get it on with Pacquiao again. I really really want this fight and I want to prove a lot of people wrong."

Although Bradley was awarded the decision by scores of 115-113 on the cards of official judges C.J. Ross and Duane Ford, Jerry Roth had the same score for Pacquiao and an informal poll of 51 writers favored Pacquiao over Bradley, 48-3.

"We know that there is a big question mark from our first fight in the last of 2012. I think that this time around that we have to answer that question mark in the minds of the fans," said Pacquiao. "We have something to prove, both of us. You know, what I'm trying to do is, I'm not predicting the fight, but I just want to do my best."

Pacquiao will earn a guaranteed $20 million, down from the $26 he earned when he lost a controversial decision to Bradley in 2012. Bradley will receive $6 million, $1 million more than in their first meeting. The fighters also agreed to random drug testing to be executed by the Voluntary Anti-Doping Association.

"This is my third pay per view. This is nothing new to me, now," said Bradley. "I'm in a different position now than I was the first time I faced Manny Pacquiao. I'm a lot more relaxed and a lot more poised, now."