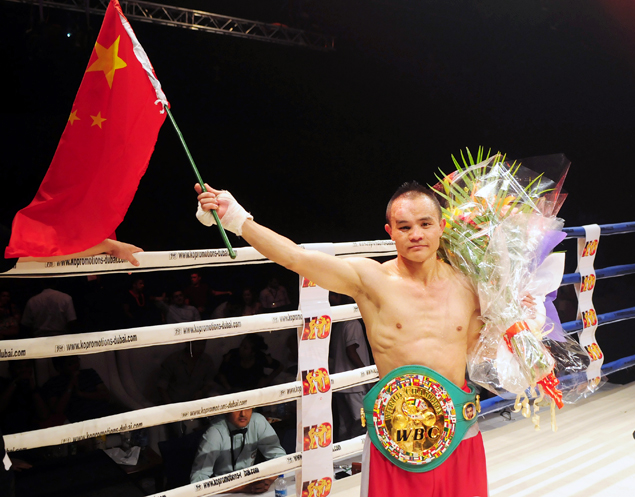 The title reign of the first Chinese world titleholder is over.

Xiong (22-5-1, 12 knockouts) was making the third defense of his title, while the Guadalajara, Mex. native Novoa (13-4-1, 8 KOs) was fighting outside of his country for the first time in his career.

Though both fighters weighed in just below the 105 pound limit the night before, the size disparity between the two was noticeable from the opening bell. Xiong, who is listed at 5-foot-0, attempted to circle away from the taller Novoa early on to avoid the wide swings of Novoa, who had spent much of his career at 108 pounds.

As the rounds wore on, Novoa began to impose himself on Xiong, overwhelming him with volumes of punches. Xiong clinched frequently to try and slow the action down, but a right hand near the end of the fifth had him going. Referee Bruce McTavish stopped the fight soon after.

The 32-year-old Novoa has now won six straight fights – including four consecutive knockouts – after a stretch that saw him sustain four losses in five fights over 16 months in 2011-2012. The only recognizable name on Novoa's ledger during that winning streak was Javier Martinez Resendiz, whom he stopped in four rounds.

Xiong had won a decision over Resendiz in 2012 to win the title, which was vacated when Japan's Kazuto Ioka moved up to 108 pounds.

In a career that stretches back to 1994, the 36-year-old Singwancha has only lost in two title fights but has feasted on nondescript opposition in recent years.