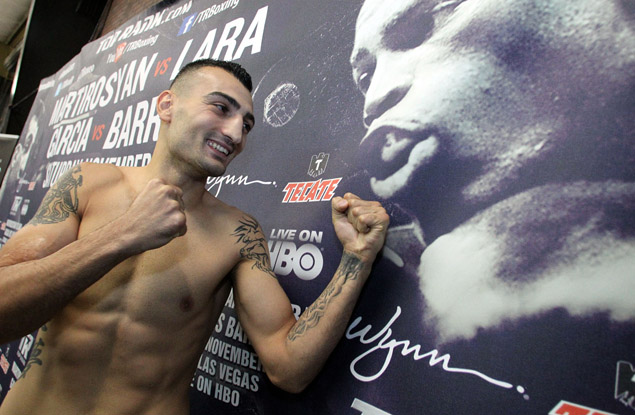 "Vanes said he's ready to go, and we're wasting no time. We're excited to give boxing fans in Southern California and those watching on ESPN an opportunity to see Vanes come 'Homeward Bound' at Morongo against a very tough and experienced fighter in Cuello," said Goossen, president of Goossen Tutor Promotions, which signed Martirosyan, of Glendale, Calif., last month.

"There is a lot to gain for both fighters, which always brings out the absolute best in them… With Vanes' popularity in the Southern California area, and the venue being only an hour from downtown Los Angeles, along with the fan-friendly ticket prices, we expect a sell-out crowd in what will only be the second time Vanes has fought in California in the past five years."

Martirosyan (33-1-1, 21 knockouts), a 27-year-old 2004 Olympian, is coming off a split-decision loss to 2008 Olympian Demetrius Andrade in a failed bid to earn the WBO’s vacant belt last November.

Before facing Andrade, Martirosyan had scored a second-round knockout of Ryan Davis in June that followed a draw with left-hander Erislandy Lara in November of 2012.

Cuello (33-3, 17 KOs), a 29-year-old Argentine, was last in the ring for a fourth-round stoppage of Juan Jose Dias in November that helped him to bounce back from a unanimous decision loss to Willie Nelson in June.

Cuello has also lost by unanimous decision to Julio Cesar Chavez Jr. in March of 2009 and been stopped in the sixth-round by Canelo Alvarez in July of 2010. His bouts with Nelson and Chavez were close and competitive.