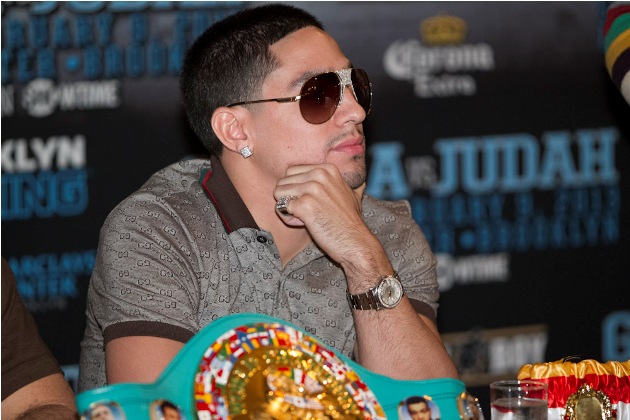 Not only will Garcia (27-0, 16 knockouts) and Herrera (20-3, 7 KOs) be on hand at the event, which begins at noon at the Verdanza Hotel's Grand Opera Salon and is open to the public, but so will Puerto Rico's Juan Manuel Lopez  and fellow two-division titleholder Daniel Ponce de Leon, whose 130-pound rematch will be shown on Showtime Extreme in advance of the Garcia-Herrera broadcast.

Garcia-Herrera will take place at the historic Colisio Ruben Rodriguez in Bayamon.

Fighters from the Maryland-Washington, D.C.-area enjoyed a hot month during televised fights in January, highlighted by the performances of IBF titleholder Lamont Peterson and unbeaten featherweight Gary Russell Jr.

On Jan. 25 at The D.C. Armory in a Showtime-televised bout in his native Washington, D.C., Peterson (32-2-1, 16 KOs) scored a one-sided unanimous decision over Dierry Jean.

Peterson is 5-1-1 with three knockout victories since falling by unanimous decision to WBO 147-pound beltholder Tim Bradley as a 140-pounder in 2009, but was coming off a non-title bout against Lucas Matthysse, who dropped him three times and stopped him in the third round in May.

A southpaw from Capitol Heights, Md., just a few miles from the border of Washington, D.C., Russell was coming off a unanimous decision over Juan Ruiz in August.

On Jan. 24 on Friday Night Fights,  light heavyweight prospect Thomas Williams (16-0, 11 KOs) rose from a knockdown to stop Cornelius White in the first round at The Little Creek Casino in Shelton, Wash.

Hailing from Fort Washington, Md., near Washington, D.C., Williams was floored between between the two knockdowns he scored against White.

"Gary Russell is one step away from a title shot, and he just has to play his cards right. Peterson was as good as he has ever been that night, completely controlled that fight. When Peterson went to another level, Jean couldn't follow. These are the best guys that we have right now."