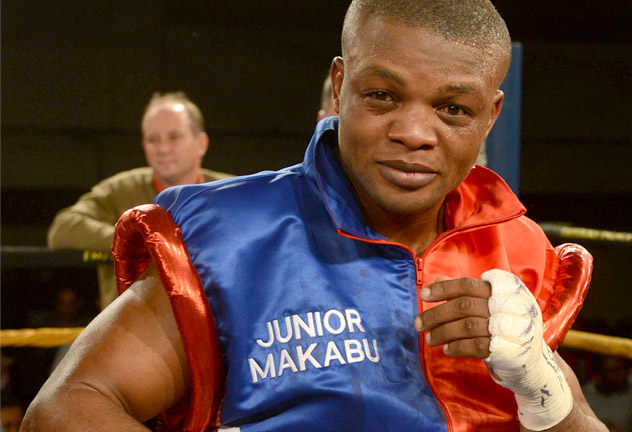 Makabu is no joke.
29
Jan
by Anson Wainwright 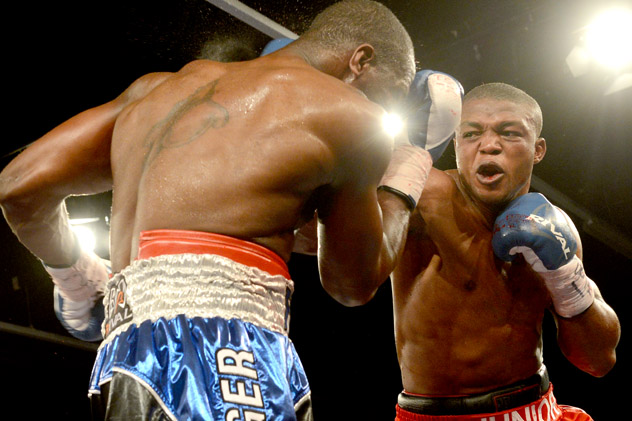 At the inception of 2013 nobody had heard of Illunga “Junior” Makabu. That all changed last July in Monte Carlo, after he handed then-unbeaten Ukrainian cruiserweight Dmytro Kucher his first loss.

Despite a lack of experience Makabu would fight Kucher to a standstill in a barnburner, winning a majority decision (115-113, 115-114 and 114-114) to announce his arrival on the world stage.

Just six weeks later, back in South Africa, Makabu (15-1, 14 knockouts) proved it was no fluke by knocking out once-touted American prospect Eric Fields in five rounds.

The lone loss on his resume came in his debut. Makabu freely admits the loss was of his own doing. “When I arrived, I couldn’t understand English,” he said. “I took a [knockdown] in the fight, the count was in English and suddenly the referee was waving everything off.”

Currently rated as THE RING’s No. 6 cruiserweight, he says he’s learned from that mistake and is readying himself for this Saturday, when he’ll return to Monte Carlo and meet power-punching Argentine Ruben Angel Mino on a card headlined by WBA middleweight kingpin Gennady Golovkin versus Osumanu Adama.

Anson Wainwright – You fight Ruben Angel Mino on Feb. 1. He’s 20-0 with 20 knockouts but largely unknown. What are your thoughts on fighting him?

Junior Makabu – I leave that up to my trainer [Harold Volbrecht]. He watches the tapes, I do the fighting. Mino doesn’t worry me. He’s never fought anyone like me – let us see what he brings on the 1st of February.

AW – This is the third change of opponent after Pawel Kolodiej and Nathan Cleverly both pulled out, so has that affected you at all?

JM – I’m a professional. I am always ready. Those guys had their reasons for pulling out. I just want to fight.

AW – You have had a really big 2013, beating three unbeaten fighters and also a very solid contender. What are your thoughts on the year in which you’ve gatecrashed the cruiserweight division?

JM – I feel well. The year made me feel very successful. Four fights, four wins, three knockouts. I’m back in the gym working hard to make 2014 even better.

AW – The win that really got you noticed was a terrific battle with Dmytro Kucher.

JM – He gave me some difficulty, but never hurt me. He was tough and I learned a lot. He could take a punch so I had to box as well as fight.

AW – Despite only once going past six rounds you were able to come on strong.

JM – In fact, I wasn’t at my best. I had been up and down to my home country sorting out my visa, so training wasn’t 100 percent. But I’m always in the gym so my fitness carried me through.

AW – You have appeared on both of the previous Golden Gloves “Million Dollar” challenge cards in Monte Carlo. Can you tell us about those experiences?

JM – People have started to love me in Monte Carlo. My promoter (Golden Gloves) has connections there so I have been fortunate enough to appear on both cards. I spoke French to the crowd and they loved it. The prince and princess were in attendance and congratulated me. It’s a great place to fight.

AW – Tell us about your team and where you train.

JM – [Former two-time world title challenger] Harold Volbrecht trains me and former world champion Brian Mitchell is my manager. I work out at Harold’s gym on the eastern side of Johannesburg, located near my sponsor, Nashua. I share a gym with top boxers like Tommy Oosthuizen and Johnny Muller.

My dream is to be with people who can take me to my dream of becoming a world champion like Gennady Golovkin or Floyd Mayweather. My focus is on boxing, not money. I want to become a great cruiserweight world champion.

AW – You were born in Democratic Republic of the Congo – could you tell us about your youth?

JM – Growing up in DRC was okay. My parents gave me everything. I had a regular upbringing without too much hardship.

AW – How did you become interested in boxing? What happened for you to move to South Africa?

JM – My father was champion of DRC – his ring name was Makabu Foreman. My father and my family were all boxers. I started out aged 9 and learned as much as I could. In the mid-2000s I heard that boxing was thriving in South Africa. I moved here in 2006 and joined Nick Durandt’s camp. It was a good move. I now have a South African wife and a Congolese wife. It’s a good life here.

AW – Five years ago you made your debut and got stopped inside thirty seconds, can you tell us what happened and how you went from that point to where you are today?

JM – When I arrived, I couldn’t understand English. I took a [knockdown] in the fight, the count was in English and suddenly the referee was waving everything off. I had no idea what was going on. It was miscommunication, no more. It made me more determined to learn English. I also made sure to get my punches in early!

AW – What do you think of the cruiserweight division? What about the current champions: WBC Krsztzof Wlodarczyk, WBA Denis Lebedev, IBF and RING Yoan Pablo Hernandez, and WBO Marco Huck?

JM – I have no idea. I haven’t seen any of those guys. Junior doesn’t check. When the fight comes up for Junior, then I take a look. Junior doesn’t watch tapes unless he has to.

AW – Tell us a little about your life away from boxing.

JM – I like to spend time with my wife, traveling, visiting people, being social. But most of my time is taken up with boxing.

AW – In closing, do you have a message for the cruiserweight division?

JM – Any cruiserweight out there must be ready for Junior Makabu. Train full-time and train harder than me because that’s the only way you can beat Junior. Boxing is my life. I’m going to be a champion.