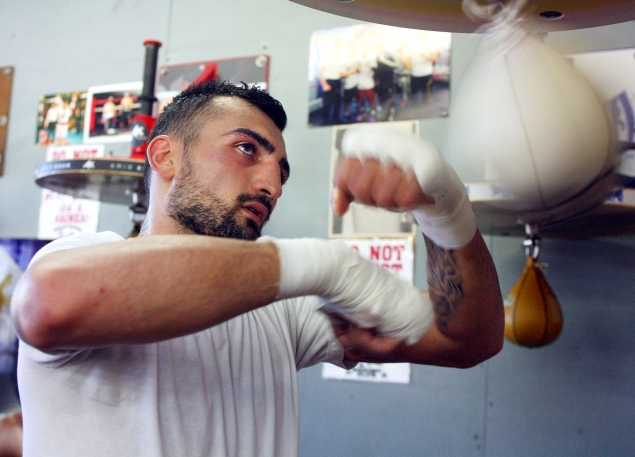 Vanes Martirosyan will be fighting under a new promotional banner in 2014.

"I'm really excited about signing with Goossen Tutor Promotions," Martirosyan said in a press release. "I see a very bright future ahead of us. I do want to thank Bob (Arum) for all his support the last seven years, I am very grateful and wish them the best of luck."

The 2004 Olympian suffered his first professional defeat in his last outing, a title fight against Demetrius Andrade on HBO. He signed with Top Rank soon after the Olympic Games, piling up wins en route to a sparkling 32-0 record, albeit against lesser opposition.

He fought Erislandy Lara to a technical draw in 2012 in his first title shot — and his first bout against a world-class fighter.

"Having tasted defeat for the first time really woke me up, and I never want that bitter taste in my mouth again," Martirosyan said. "Words can't express how I've felt over the last few months, but my performance in the ring from this point on will give everyone an idea. This loss has ignited a fire in me that had almost faded through the long years it took me to get to that title fight. I'm hungrier than ever, and simply can't wait to get back in the ring. I am working hard and will be ready to face anybody in the 154 division. I'm on a mission to become a world champion."

The Armenian-American is currently rated No. 7 by THE RING at 154 pounds. Dan Goosen, founder of the promotional firm that holds his namesake, is excited for the latest addition to his stable.

"What we look for in our fighters is talent and the desire and willingness to overcome every obstacle, and we know Vanes has all the tools to do just that," Goosen said. "He's ready to start with renewed vigor and said one simple thing to me upon signing: 'I'll fight anybody!'"

Mike Coppinger is a member of the Boxing Writers Association of America and a contributor to USA Today's boxing coverage. Follow him on Twitter: @MikeCoppinger.