Don’t call it a comeback: Victor Ortiz returns to boxing 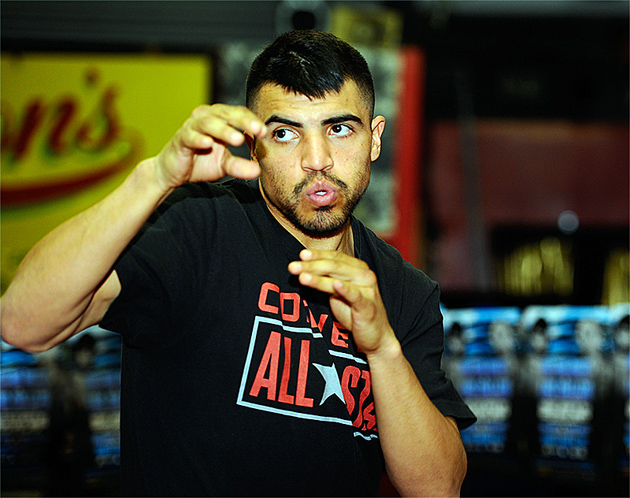 After a 19-month absence from the ring, Victor Ortiz does not want to use the word “comeback’’ to describe his welterweight match against Luis Collazo at the Barclays Center on Thursday night.

Ortiz appeared on the TV program “Dancing with the Stars.” He had a role in the upcoming movie “Expendables 3.” He just wasn’t appearing in a boxing ring near you, which is where he gained a measure of fame.

The welterweight division is crowded and talent rich. A prolonged absence from the ring could render a boxer an afterthought in the minds of fans. The fight against Collazo is a way to put Ortiz back into the consciousness of boxing fans. A victory puts him back in the championship mix.

Richard Schaefer, the CEO of Golden Boy Promotions, said Ortiz will always have a place among the welterweights that he promotes.

“He is, without any question, one of boxing's most charismatic young stars, has made headlines in the ring with his exciting style,” Schaefer said. “People like to see his fights. You just never know what happens, but you know that it's going to be something exciting. The word ‘boring’ and Victor Ortiz just don't go together. There's always excitement in the air when Victor Ortiz starts that ring walk people are at the edge of their seats.”

Ortiz (29-4-2, 22 knockouts) said he never really left the gym. He was always training and keeping himself in shape. Shortly after having surgery on his broken jaw, which needed two metal plates, eight screws and was wired shut for a month to repair, he returned to the gym in Ventura, Cal., to a workout.

“Even when I was filming the movie in Bulgaria for three months I would go to the gym before and after we would film,” Ortiz said.

Boxing has never been far from Ortiz’s thoughts in the 19 months that he has been out of the ring. But he wasn’t following all the moves being made in the welterweight division.

It is a tough argument to advance considering some of the welterweight matches that have unfolded since Ortiz has been on hiatus. Floyd Mayweather has earned more than $100 million outclassing Robert Guererro and Saul Alvarez. And Marcos Maidana has beaten Josesito Lopez and Adrien Broner. Once you’ve been away from the game for so long and you have to prove it all over again.

It was losses against Maidana and Mayweather that left Ortiz having to prove himself to the many doubters who saw cracks in his character.

The match against Maidana cast Ortiz in a bad light. They both went down in the fight, but Maidana got the last knockdown in the sixth round before the fight was stopped on cuts. Later in the postfight interview in the ring Ortiz told HBO’s Max Kellerman: “I’m young. I don’t think I deserve to get beat up like this.”

Ortiz was skewered by his fans and critics, most of them questioned his heart and his boxing IQ. All those comments after the Maidana fight flooded back when he fouled Mayweather with an illegal headbutt and then got KO’ed while apologizing and then had his match against Lopez stopped because of the broken jaw.

“People look at Victor’s two fights (Maidana and Lopez) that he quit in or whatever and they can’t understand it,” said Nirmal Lorick, the manager for Collazo.

“Victor is one of those fighters who know his limits. If he’s hurt he’s not going to keep going and get damaged to the point where he’s out for the rest of his career. Boxers always think that they have to be that macho person. Victor was smart enough to know that he had a broken jaw and that Maidana was getting the best of him why risk it? I don’t look at those two fights as Victor. I look at the Andre Berto fight where he came and he fought every round.”

Ortiz was at his best against Berto. They fought a back-and-forth battle, exchanging knockdowns the same way that Ortiz had against Maidana. But in the end Ortiz won a decision.

Ortiz said he doesn’t allow other people’s negative comments to affect him anymore.

“I’ve reached the point of not caring what people say,” Ortiz said. “You go on Google and see what people say, “He has no heart. He has no balls.” I get it. People have their opinion and I have mine. Yet I’m still the guy who gets into the ring and continues to fight, but I have no heart and no balls.”

He said people don’t realize how long he fought Lopez with a broken jaw and how badly injured he was.

“It was in the fourth round when he threw a little hook that caught me in front of the wisdom tooth, which cracked the jaw,” Ortiz said. “I fought five more rounds with it cracked and broken. In the ninth round he caught me with a shot and it was just hanging there.”

He isn’t going into the match against Collazo thinking that it will have as much drama. But he never knows. One thing he knows is that he’s not concerned about what Collazo can do to him.

“I think Luis is a prime veteran,” Ortiz said. “He knows what he’s in there for. He’s a veteran. I’m a young veteran. I can’t say I have any respect for Collazo. I don’t have respect for him because I’m fighting him. At this point in time I can’t respect any welterweight.”

“No,” Ortiz said. “It could have been respect if he wouldn’t have beaten me the way that he did and instead taken the belt the way it was is supposed to be taken. I would love to get a rematch with him. I deserve a rematch.”

That could happen, but first he has to dispatch Collazo, who also wants to be in the Mayweather sweepstakes.