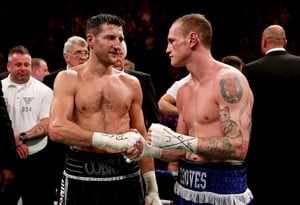 Carl Froch has been told he must face George Groves within 90 days or risk being stripped of his IBF super middleweight title.

Nearly everyone ringside in Manchester that night, along with a massive armchair global audience, felt the referee had intervened far too soon when he stopped a gripping grudge showdown by ruling Groves unable to continue.

Now, following Groves' appeal, the IBF has investigated and ordered an immediate rematch.

The demand for the pair of warring Brits to set the record straight has been growing ever since the first meeting but so far talks held by Matchroom promoter Eddie Hearn and the fighters have failed to produce an agreement.

Indeed, 36-year-old Froch had claimed earlier in the day that Groves had rejected a 'seven-figure offer on the table' and that a fourth defense of the IBF belt, against Julio Cesar Chavez Jr in Las Vegas, was his most likely next step.

Those remarks, however, came before the IBF stepped in with its ruling for Froch-Groves II to happen first. Not that Hearn, Froch's long-time promoter, seems overly concerned by the latest development.

"More updates..IBF call for rematch for Froch v Groves..doesn't change much re CF's options but still hopeful of agreeing terms with GG,'' Hearn said on Twitter.

Groves, though, is understanably thrilled to have won his appeal and says the ball is now firmly in the court of his bitter rival.

"We have managed to get justice. The IBF has accepted my appeal and I'm very happy, " said the west Londoner. "Now it's up to Carl Froch to agree to this happening. I can't see it not happening unless he prefers to give up his world title rather than fight me."