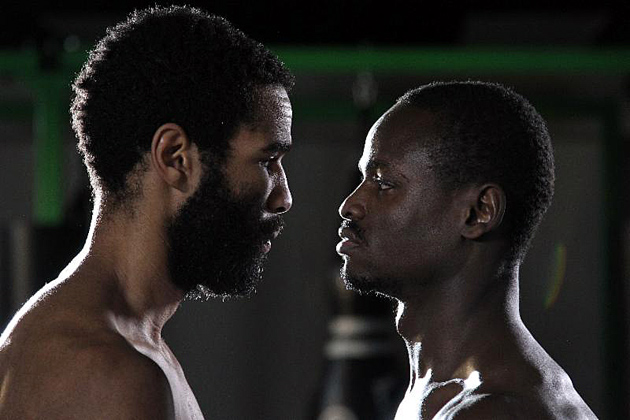 The two will do battle at the D.C. Armory in Peterson's hometown of Washington, D.C.

After weighing in, Jean said he dreamed of scoring a knockout victory over Peterson, who is 4-1-1 with three knockout victories since falling by unanimous decision to WBO 147-pound beltholder Tim Bradley in 2009.

"The key word is 'dream,' " said Peterson, who was presented with a cake in honor of his celebrating his 30th birthday on the day of the weigh-in. "We're all entitled to our dreams. He's going to have to show me tomorrow."

Both Peterson and Jean were last in the ring in May, with Peterson (31-2-1, 16 knockouts) being stopped in the third round of a non-title bout against Lucas Matthysse, and Jean (25-0, 17 KOs) scoring a fourth-round TKO over Cleotis Pendarvis.

"They will see a nice fight from me, and I will show to the world that I'm the best, pound-for-pound. It doesn't matter fighting in front of his home town," said Jean of Quebec, Canada. "I've got a big crowd that follows me, you know? I'm going to feel like I'm at home. I'm going to go out there and make him remember his last knockout, so I'm going to knock him out. [His dream] turns out that I've got the belt him my hands and I go back to Montreal with it."

Peterson's past two wins were in D.C., coming by split-decision over Amir Khan and by eighth-round knockout over Kendall Holt.

"It's a great feeling. The crowd is going to be cheering for me. My friend, my family, they'll come for support, and I love them for that, and I want to go out there and put on a great performance for them," said Peterson, adding that the stoppage loss to Matthysse is behind him. "Nobody's worry about that. I'm ready to fight right now. At this point, who cares about what they say. I'm going to show tomorrow what we're about."

Rosado faced unbeaten fighters in his last three bouts and failed to get the victory in any bout. He was bloodied and stopped in two title-bout challenges and he suffered a disputed split-decision loss-turned-no-decision in the third bout. However, his profile in the sport has never been higher thanks to his game effort in each fight.

Rosado rose from a second-round knockdown and was very much in contention during October's 10th-round TKO loss to WBO middleweight titleholder Peter Quillin before the fight was halted due to a severe cut over his left eyelid. Prior to facing Quillin, Rosado had lost a split-decision in May to J’Leon Love that became a no-decision after Love failed his post-fight drug examination.

Before the bout with Love, Rosado lost by a bloody seventh-round stoppage to WBA middleweight titleholder Gennady Golovkin in January, ending his run of seven straight victories, five of them by knockout.

Calling his quest "Operation Chop Down Charlo," Rosado has said that he is seeking the knockout Saturday.

"My last fight was in October, so I started training three weeks after the Quillin fight for this fight, so I was already in shape and my weight was good. i went to Puerto Rico and the weather was hot. I'm good," said Rosado. "Experience can be tough, and that's something that I've been through. That's definitely going to be a factor. I'm a veteran, and I'm going to use that to my advantage."

A twin brother of fellow 154-pounder Jermall Charlo, Jermell is coming off a 10th-round stoppage of Jose Rodriguez in October that followed a unanimous decision over Demetrius Hopkins in June.