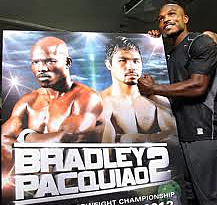 Top Rank CEO Bob Arum said that a deal is close for an April 12 rematch at the MGM Grand in Las Vegas between Manny Pacquiao and Tim Bradley, whose disputed split-decision over Pacquaio won the WBO's 147-pound belt at the MGM in June of 2012.

"It's not done yet," said Arum on Thursday. "But I hope to have announcement by tomorrow."

Earlier this month, Arum and Pacquaio's advisor, Michael Koncz , met at Arum's Los Angeles home with the goal of deciding Pacquiao's next opponent, having apparently narrowed it down to Bradley and the eight-division titlewinner's former sparring partner, Ruslan Provodnikov.

Arum acknowledged on Monday that Bradley-Pacquiao II was "the one that we're working on now," adding, "I believe that the issues are being narrowed down, and I'm optimistic."

In victory, Pacquiao (54-5-2, 38 knockouts) rebounded from the loss to Bradley and from being dropped twice during a sixth-round stoppage loss to Juan Manuel Marquez in December of 2012.

The 30-year-old Bradley (31-0, 12 KOs) has won his last two fights by rising from a 12th-round knockdown to unanimously decision Provodnikov in March of last year before earning October's split-decision over Marquez, who is 1-2-1 against Pacquiao.

Provodnikov (23-2, 16 KOs), who turned 30 on Jan. 20, bounced back with two knockdowns during a 10th-round stoppage of  Mike Alvarado, from whom he earned the WBO's junior welterweight title.

Marquez (55-7-1, 40 KOs) already was out of the picture, however, having expressed bitter disappointment following the loss to Bradley compared to supremely satisfaction with his triumph over Pacquiao.

"Marquez took himself out of the picture early, and Ruslan, he's a tremenous fighter and he has a good style. But again, we have to look at the marketability of the fight and what we think," said Koncz.

"We're not mind-readers, be we do think that we know what the fans are looking for, and I just don't know that the Ruslan fight was able to win the fans as much as a rematch with Bradley does."

Bradley edged Pacquiao by scores of 115-113 on the cards of official judges C.J. Ross and Duane Ford, while Jerry Roth had it the same way for Pacquiao. An informal poll of 51 writers favored Pacquiao over Bradley, 48-3.

"We want this fight because No. 1, that's Manny's request. Manny wants to get back what he lost on a controversial decision to Bradley, and that's his WBO championship belt," said Koncz. "He wants to prove to the fans that it was a very controversial win and that the outcome could be different this time."

The Bradley-Pacquiao contract contained a clause calling for a return bout, although Pacquiao was widely reported to be considering the fourth fight with Marquez.

In the immediate aftermath of his loss to Bradley, Pacquiao hinted at a rematch with the fighter from Palm Springs, Calif., who ended his 15-bout winning streak that included eight knockouts.

"My supporters shouldn't worry," Paquiao told The Associated Press in Manila, Philippines. "We're going to get that title."