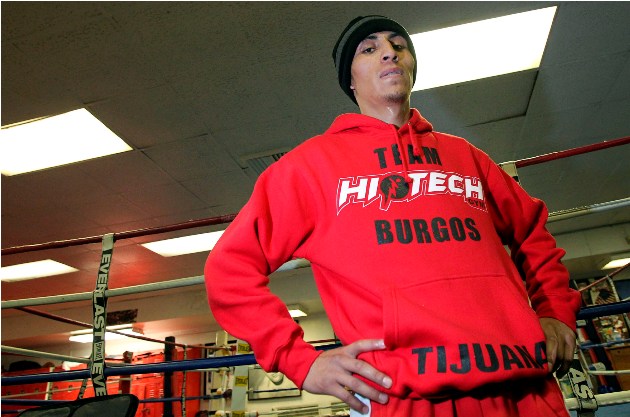 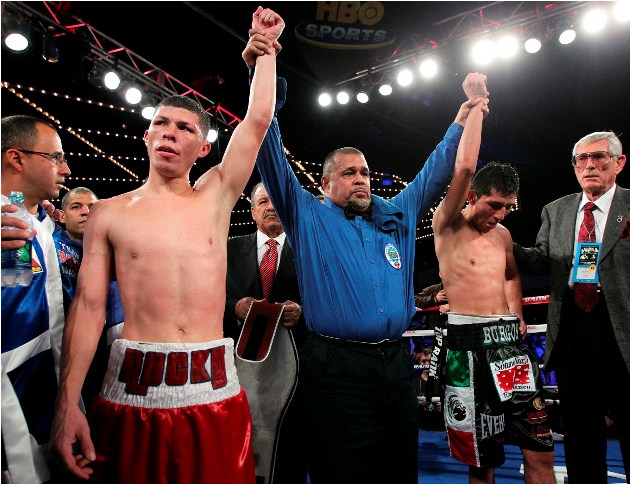 Juan Carlos Burgos (right) was crushed when his WBO 130-pound title fight with Rocky Martinez (left) in January was ruled a split draw. The Tijuana native returns to Madison Sqaure Garden's Theater, site of the Martinez bout, on Saturday to challenge Mikey Garcia for the same belt.

It’s beginning to look like timing isn’t one of Juan Carlos Burgos’ strong points. The last time he was in New York City, he challenged for the WBO junior lightweight title at The Theater at Madison Square Garden and came up short, losing in a draw to Roman “Rocky” Martinez last January.

Burgos is back in New York City, seeking to win that WBO junior lightweight title again. But this time he will be fighting champion Mikey Garcia, one of the fastest rising stars in boxing. And Burgos arrived in New York just in time for a raging snowstorm that blanketed the area in nearly a foot of snow on Tuesday.

“I’m really surprised by the wonder of Mother Nature,” Burgos said. “I’ve never been in a snowstorm.”

The snow will have blown away by the time the real storm arrives. That will happen when Burgos climbs those steps and enters the ring against Garcia (33-0, 28 KOs) in the main event at The Theater on Saturday night. The scheduled 12-round bout will be broadcast on HBO’s Championship Boxing.

Burgos (30-1-2, 20 KOs) is more than aware of what the undefeated champion Garcia of Oxnard, Calif., brings to the table. He saw him dismantle Orlando Salido for the WBO featherweight title on the same card where he came up with a draw against Martinez. Later he saw Garcia demolish Martinez to win the junior lightweight title. Burgos believes he’s more than ready to handle whatever Garcia throws at him.

“I think Garcia is a good fighter and has all the qualities to become a great fighter,” Burgos said. “In the Martinez fight, where he got knocked down, we saw some things we can exploit. I have power – more power than Martinez – and I am going to use that to my advantage. Martinez showed something when he knocked Garcia down and I have a lot more power than Martinez does.”

Burgos has had some hard luck in title matches. This will be his third try. He realizes that the clock is ticking and this might be his last real opportunity.

In his first try he traveled to Japan to take on Hozumi Hasagawa for the vacant WBC featherweight title in 2010. Burgos lost a unanimous decision. He chose the wrong strategy against the veteran Hasagawa, who had made 10 defenses of the WBC bantamweight title. Burgos got off to a slow start and by the time he got rolling in the fourth round, it was too late to make up the difference.

When he came up with the split decision draw against Martinez, Burgos was devastated. One judge had it 116-112 for Martinez, one had it 117-111 for Burgos and one had it 114-114 even. Burgos broke down in his locker room and cried. He went back to the drawing board and started working hard for his next match.

“You can say that those two draws were not just. I worked very hard in those fights to get the win and unfortunately two judges did not appreciate my work in the ring,” Burgos said.

When he got word that he was fighting Garcia for the title Burgos decided to switch things up. He knew if he didn’t change the way he was preparing that he risk another draw or worst, losing the fight.

He hired a strength and conditioning coach for the first time in his career and used Cross Fit training as part of his workouts. Not only did it help his conditioning, but it bolstered his confidence.

Burgos made one more change. He brought back his original trainer, Roberto Sandoval, who worked with him since he was a nine-year-old amateur in Tijuana, Mexico.

It was a major move for Sandoval, who was the trainer and manager for Burgos’ uncle, Victor, a former IBF light flyweight champion. Victor suffered a blood clot on the brain after a match with Vic Darchinyan at the Home Depot Center in Carson, Cal., in 2007. He was placed in a coma at the UCLA Medical Center. Sandoval vowed that he would never train another boxer if Victor made it out of the coma. Victor emerged from the coma 45 days later and Sandoval stopped training Juan Carlos.

Victor has regained normal function and works for the city of Tijuana where he lives with his wife and three daughters. Juan Carlos said his uncle was a major inspiration for him when he was growing up.

“I was watching him box from the time I was six years old,” Burgos said. “He and my father, who was an amateur boxer, are my biggest motivations to being a world champion”

That is why Burgos pressed Sandoval to come back to work with him for the most important fight of his career against Garcia at The Theater on Saturday night. This could be a “now or never” type fight for the 26-year-old contender.

Maybe the timing is just right for Burgos.