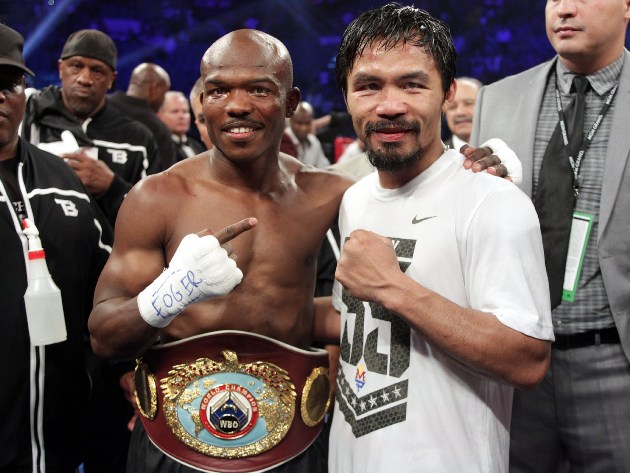 Although Top Rank CEO Bob Arum acknowledged that negotiations are ongoing for a rematch between Manny Pacquiao and Tim Bradley on April 12 at the MGM Grand in Las Vegas, the 82-year-old promoter vehemently dismissed reports that a deal has been reached.

"That's the one that we're working on now, and it may not be the one that takes place. Although I believe that the issues are being narrowed down, and I'm optimistic," said Arum. "But this process takes time and you can't just make it happen. Obviously, if I didn't think that it had a possibility of happening, then I wouldn't bother negotiating."

Pacquiao, who turned 35 in December, is coming off November's unanimous decision over Brandon Rios, who made his welterweight debut in the bout.

In victory, Pacquiao (54-5-2, 38 knockouts) rebounded from a sixth-round KO loss to Juan Manuel Marquez in December of that year. He had lost a controversial split decision to Bradley last June.

The 30-year-old Bradley (31-0, 12 KOs) won his last two fights by rising from a 12th-round knockdown to unanimously decision Ruslan Provodnikov last March before earning a split-decision over Marquez last October.

Provodnikov, 30, is another fighter who has been considered to be in the mix to face Pacauiao. A former sparring partner of Pacquiao's, Provodnikov (23-2, 16 KOs), bounced back with two knockdowns during a 10th-round stoppage that detehroned Mike Alvarado as WBO's junior welterweight titleholder.

"I've been involved in this business for so long that I know that until everything is agreed to, then there's no fight. If it ends up blowing up in our face, and he ends up fighting Provodnikov, then you look like a horse's ass. So the process is ongoing. It's not done. These things take a long time to finish the negotiations," said Arum.

"Now, are we talking to the fighters about that fight and trying to get everything done? Yeah. But it's not done yet, and it will never get done if we don't reach an agreement with those fighters. There are all of these points and all of these side issues, and you've got to sort through it all and hopefully, eventually, it will get done. There's no guarantee."