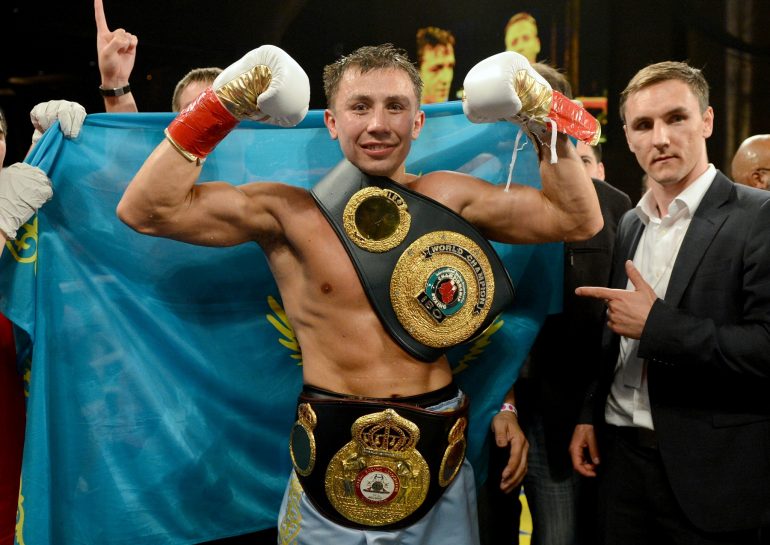 Even though he is focused on Gennady Golovkin's  WBA middleweight title defense against Osumanu Adama on Feb. 1,  Tom Loeffler of K2 Promotions has an eye on Golovkin's future, which includes a return to HBO on April 26 at Madison Square Garden.

Golovkin (28-0, 25 knockouts) will pursue his 16th consecutive stoppage victory when he meets Adama (22-3, 16 KOs) in Monte Carlo, Monaco. The bout was originally slated to be on HBO, but will no longer be available on the network due to issues concerning production logistics that could not be worked out.

"Clearly, we can't look past Adama," Loeffler said. "Adama is a very solid middleweight. He went the distance in a very competitive fight with (Daniel) Geale, who was the IBF champion at the time. Even thought it is my job to look forward and to strategize, Gennady is fully focused on Adama."

THE RING and WBC middleweight champion Sergio Martinez would be an ideal opponent for GGG, even though he is in negotiations for a bout opposite three-division titlewinner Miguel Cotto for June 7 at MSG.

"What I'd like to see is that there are so many big names in the middleweight division for Gennady to fight, that I would like to see Gennady establish himself as clearly the best middleweight in the world," said Loeffler.

"We believe that he has already done that," Loeffler added. "However, as long as Sergio still is at that point, the only way that we can sort that out is if Sergio and Gennady fight. So whether it's Sergio or another big name at middleweight, that's really what the focus is at this point."

Down the road, fighters like Canelo Alvarez and Floyd Mayweather Jr.  would be ideal but are unlikely, perhaps even for the duration of 2014.  Alvarez is scheduled to return on March 8 against Alfredo Angulo, and Mayweather will be back in action on May 3, potentially against Amir Khan.

RING and WBA super middleweight champion Andre Ward has not dismissed the potential for a bout against Golovkin, although the 2004 Olympic gold medalist is not likely to drop in weight to make it happen.

"We've always said that Gennady would move up if that made sense, or if there was a compelling fight that he would move down," Loeffler said. "Clearly names like Canelo and Floyd are the ones, but they don't seem realistic at this point. I think that a move to 168 might be possible, although, clearly, right now, we feel that Gennady's popularity has jumped over where Andre is. There's no disrespect to Andre, because he has clearly established himself as the best 168-pounder."

"But from a marketability standpoint, Gennady's ratings are higher than what Andre's were in his last fight, and it just doesn't seem like the financial picture would work for a fight like that at this point," Loeffler went on. "It seems like Andre wouldn't come down to fight Gennady at 160, so it just seems like that fight at this particular point is not realistic. Although in the future, I think that would be a megafight if both fighters remain undefeated."

"Even though we look at it as somewhat of a setback with Perez fighting to the draw, Carlos Takam was a very solid guy, and a hard worker and he had 23 knockouts. Had the head butt not happened in the third round, we feel that Perez would have given a much stronger performance," said Loeffler.

"Clearly he won the early rounds, and he said that that definitely affected him with the head butt. Perez is not the type of fighter who is going to quit, although that cut was deep enough where many doctors would have stopped the fight. But he's the type of guys who is not going to quit."

Perez was coming off a 10-round unanimous decision that left Magomed Abdusalamov in a medically induced coma until entering rehabilitation at the Helen Hayes Hospital, in West Haverstraw, N.Y., in December.

"There are still a lot of good fights for (Perez) in the heavyweight division, whether it's a fight against Bryant Jennings or Andy Ruiz, both of whom are undefeated. " said Loeffler. "I've informed HBO that Perez is willing to fight any of those guys and not be selective about who any of his opponents are."