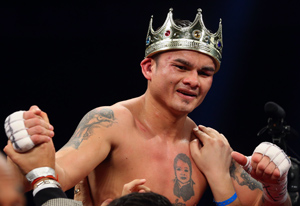 Marcos Maidana's manager says Floyd Mayweather will likely face Amir Khan on May 3 and calls the pound-for-pound king's mention of Maidana as a possible opponent for that date a "smoke screen."

Mayweather brought up Maidana during a recent trip to South Africa.

"We'll know within the next seven days if it's Amir Khan, if it's Marcos Maidana," said Mayweather. "We don't know who it is at this particular time. Hopefully it's somebody who is very, very exciting so that we can continue to give you guys nothing but excitement."

Maidana's manager Sebastian Contursi says Mayweather knows he won't be facing Maidana, particularly after Argentine slugger had already been tabbed for a rematch with Adrien Broner. Khan stated publicly late last month that he has signed his contract to face Mayweather on May 3 at the MGM Grand in Las Vegas.

Maidana (35-3, 31 KOs), who, like Broner, is advised by Al Haymon and promoted by Golden Boy Promotions, upset Broner via unanimous decisioned to win the WBA's 147-pound title on Dec. 14.

"I think that it's just a smoke screen," Contursi said of Mayweather's recent statements. "The same person and the same promoters are involved with Floyd Mayweather and Broner and Maidana, so if Maidana was going to be the chosen one for Mayweather on May 3, we would have known already.

"Ahead of of that, we had been informed that Adrien Broner is exercising his opportunity for the rematch. So I think that it's very clear that Amir Khan is going to be the opponent for Floyd. I mean, it's just a smoke screen."

Although April was the originally targeted month for Maidana-Broner II, Contursi said that it appears that date could be pushed back given that Maidana's girlfriend is expecting the birth of their daughter in mid-March.

"We have no problem with Broner. That's a very tough, very competitive fight, once again, because Broner is a real competitor and a real champ. Of course we are open to those kinds of fights, but the time frame is just not good because we would need a full training camp," said Contursi, yet again dismissing the notion of fighting Mayweather in advance of Broner.

"Maybe we would be ready to fight in May or June, but we are open to Broner, of course. I think that Floyd is just using Maidana to promote, which is good, because it's good exposure for Maidana and Adrien Broner to be [mentioned] by the best in the world. But there is no way that Maidana is going to be fighting Floyd on May 3 when they've already announced that we're going to be facing Adrien Broner. That doesn't make sense to me."