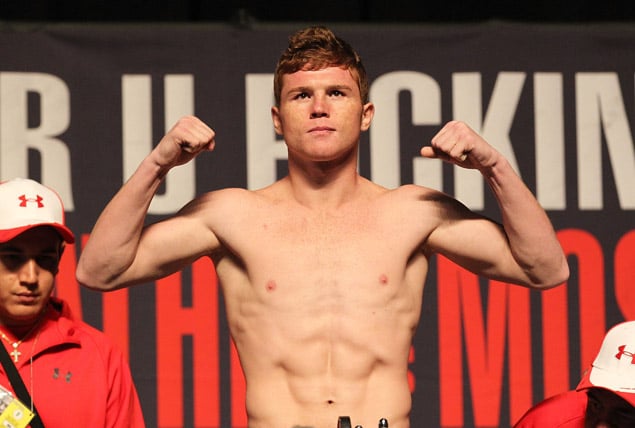 In the bout prior to the televised pay per view broadcast will be a lightweight fight between ex-beltholder Jorge Linares (35-3, 23 KOs) and Japan's Nihito Arakawa (24-3-1, 16 KOs), the latter of whom rose from the canvas during a brutal unanimous decision loss to Figueroa in July.

March 8 is a hallowed date in boxing history as in 1971, "Smokin" Joe Frazier first met Muhammad Ali in the ring to begin their epic trilogy. Now, eight fighters, including two of the most exciting Mexican stars of today, will attempt to do their part to add to the lore of that date.

"This is the type of stacked, all-action fight card that Showtime has become known for. We are proud to present this excellent main event and compelling co-features on our pre-eminent platform, Showtime Pay Per View," said Stephen Espinoza, executive vice president and general manager, Showtime Sports.

"Last year, this network emerged as the premier destination for boxing's biggest events and most competitive fights. The men and the matchups on this fight card embody our commitment to deliver the best the sport has to offer."

"This is a great fight for me and for the fans, and I can't wait to get back in the ring on March 8," said Alvarez, who is 23. "Angulo is a true warrior, and I have to be alert every second of every round when I fight him. I expect that we will put on a fight no one will ever forget."

Although Schaefer had hoped that Alvarez would have his next fight against Miguel Cotto, whom he offered a deal worth in excess of $10 million, it appears that the Puerto  Rican star will take a bout against RING/WBC 160-pound champ Sergio Martinez. In addition, Angulo was chosen for Alvarez over a field that had included Molina and Lara.

"When we presented opponents to Canelo for his return fight, he immediately took the man who he expected would give him the toughest challenge in the ring and who also would help him give the fans the most exciting fight possible," said Schaefer of Alvarez, who is also scheduled to fight on  July 26 and Nov. 22 of 2014 .

"Alfredo Angulo fits the bill on all counts, and this will not only be a stern test for Canelo, but I know fight fans are going to see all action from start to finish. I can say that about all the fights on the card, and in keeping with Golden Boy Promotions' promise to fans, we're making sure to deliver the most competitive and compelling matchups that we can."

For Angulo, being chosen to fight Alvarez "means that Alfredo still is relevant," said the fighter's manager, Michael Miller. who added, "he's getting a great opportunity to go and prove to the world that he's still got what it takes to step up to the plate again against the world's most elite fighters in this weight category."

"Canelo is a great young fighter who has earned his way to the top," said Angulo, who also derives motivation from his 8-year-old daughter, Rebecca. "That being said, I know I'm hungrier than he is right now, and I will take him to places he’s never been. Our fans in Mexico and around the world will see what we're all about when we fight."

Santa Cruz was last in the ring for December's unanimous decision over Puerto Rico’s Cesar Seda , overcoming a southpaw for the first time since June of 2012, when he dethroned Vusi Malinga for the IBF’s vacant bantamweight belt.

"I’ve always been a fan of Cristian Mijares, and I know he will give me a tough fight on March 8," said Santa Cruz. "When two Mexicans get into the ring together, it's always a show, and this fight will be no different."

Mijares, meanwhile, has won two straight since falling by split-decision in April to Terrazas.

"Santa Cruz is an impressive young fighter and a worthy champion," said Mijares. "I respect him because he fights like I fight: to get the knockout and give the fans a great fight. They will get their money's worth on March 8."

Ricardo Alvarez is hoping to follow in the path of his two siblings, including Rigoberto Alvarez, who was dethroned as titleholder following a decision loss to Trout in February of 2011.

If successful against Figueroa, Ricardo Alvarez could achieve a milestone since "that would be the first time in the history in Mexico where three brothers become world champion," said Schaefer, adding, "Canelo is one of them, Rigoburto was one of them, and now, Ricardo is going to try to be one as well going against Omar Figueroa."

"World champions are in the Alvarez bloodline, and we're going to make history when I become the latest champion from our family on March 8," said Ricardo Alvarez. "Figueroa is a great young fighter, but I will be the one with his hand raised in victory."

The determined Figueroa scored knockdowns in the second and sixth rounds of his victory over Arakawa, and will look for a repeat performance against Alvarez.

"I can't wait to get back into the ring on March 8. It's been too long, and I'm ready to defend my title," said Figueroa, who turned 24 last month. "The fans know what I can do in the ring, and they're going to see the best version of me yet against Alvarez."

Having made his American debut against Figueroa, Arakawa expressed equal zeal concerning his matchup with Linares.

"The United States fans treated me so well when I fought here against Omar Figueroa," said Arakawa. "I'm excited to be back to fight Linares. He is a true warrior, and we will put on a memorable fight for sure."

Linares is in pursuit of his fourth straight win and his third consecutive knockout since, himself, being stopped in consecutive losses by Sergio Thompson  in the second round in March of 2012, and, Antonio DeMarco in the 11th in October of 2011.

"I’ve worked hard to get back to the top of the division," said Linares, who was last in the ring for November's first-round stoppage of Francisco Contreras. "I can't let Arakawa slow me down. He's a tough, rugged fighter who will be in front of me all night, but I am confident that I will be victorious."

A Mexico-born Chicago resident who is promoted by Leon Margules, of Warriors Boxing, and managed by Luis DeCubas Sr., Molina dethroned Ishe Smith  by majority decision for his third straight victory on the Mayweather-Alvarez card.

The win over Smith was Molina's first since falling by controversial 10th-round disqualification loss to James Kirkland in March of 2012, having rebounded with decisions over Damian Frias and ex-beltholder Cory Spinks in August of 2012 and February of 2013, respectively.

Molina, 30, has endured a draw as well as a six-round majority decision loss against current WBC middleweight beltholder Julio Cesar Chavez Jr. in December of 2005 and 2006, respectively, and took an unbeaten streak of 11-0-1 with just two stoppages into the fight with Kirkland.

Molina’s 12-bout run includes a victory over former welterweight beltholder Kermit Cintron in July of 2011 and a draw with then-unbeaten Lara in March of 2011.

During his streak, Molina also beat welterweight fringe contender Ed Paredes by unanimous decision in April of 2009. Paredes has gone 13-0-1 with nine knockouts since falling to Molina, whose last loss prior to Kirkland was by eight-round majority decision against junior welterweight contender Mike Alvarado in February of 2007.

Two other setbacks for Molina were against then-unbeaten fighters Jonathan Ochoa and Wayland Willingham in September of 2004 and December of 2006, respectively. Ochoa and Willingham never fought again after being knocked out in their only career losses.

Charlo, of Houston, Texas, will be after his fifth consecutive stoppage win, and is coming off a fifth-round knockout over Joseph De los Santos in December.

Jermell Charlo will be in action against two-time 160-pound title challenger Gabriel Rosado on Jan. 25 in Washington, D.C., at the D.C. Armory, on the undercard of a junior welterweight clash between IBF titleholder Lamont Peterson’s and mandatory challenger Dierry Jean.