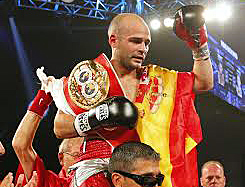 IBF junior featherweight titleholder Kiko Martinez will pursue his fourth straight knockout victory and the third defense of his belt against ex-titleholder Hozumi Hasegawa in April in Japan, his promoters announced on Wednesday.

However, since Frampton's time is not due yet as Martinez's mandatory challenger, Lewkowicz said the fighter decided to take a voluntary defense, with contracts having been signed for the bout with Akihiko Honda of Teiken Promotions, which handles Hasegawa.

"We know that we would have a very tough fight with this guy [Frampton,] and he's willing to take the chance. However, why not use the non-mandatory fight to gain more tranquility for his family, and the money that he deserves as the champion?" said Lewkowicz of Martinez, who is 27.

"Why go straight to the mandatory? It doesn't make sense to me as a promoter, as well as Gary Shaw and Sergio Martinez. We'll take that fight. We're not afraid to fight (Frampton), but in the meantime, we're fighting a great fighter and I believe that a win over Hasegawa will be great for Kiko, and that he will get more experience and more confidence to knock out the fighter [Frampson] that knocked him out."

Hasegawa (33-4, 15 KOs) won the WBC's bantamweight belt by unanimous decision over Veeraphol Sahaprom in March of 2006 and defended it 10 times, including seven defenses by stoppage.

Lekowicz said the exact date of the fight and venue will be announced soon.