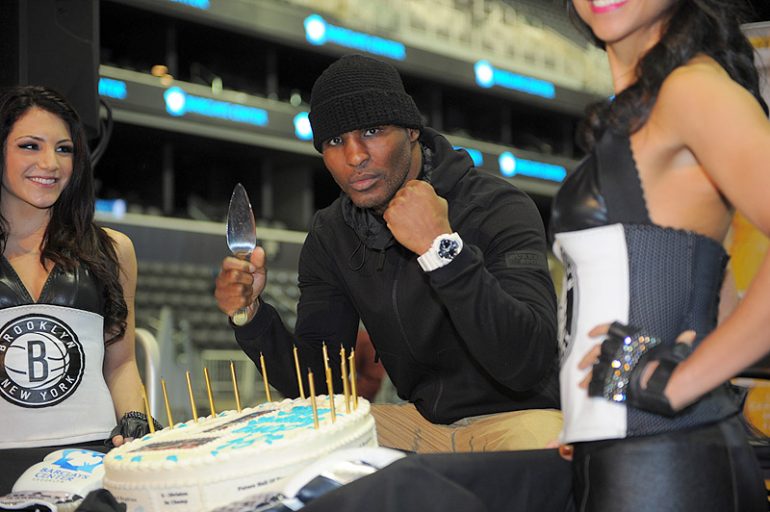 Schaefer told Hopkins that a deal has been reached, in principle, with promotional stablemate and WBA beltholder Beibut Shumenov for a unification bout.

Hopkins-Shumenov would happen either on March 29 at Barclays Center in Brooklyn or April 19 at the Alamodome in San Antonio, Texas. Schaefer said both venues will play host to Golden Boy events.

Already the oldest man to win a significant crown, Hopkins, who fights on Showtime (along with Shumenov), wants to get beyond Shumenov and face the winner between hard-hitting counterparts RING and WBC champion Adonis Stevenson and WBO beltholder Sergey Kovalev (should those two fight this year).

"I called Bernard today on his 49th birthday, and had a very nice conversation with him. I told him how much I appreciate my friendship and my relationship with him, and what an amazing person he is, and that I'm really proud of the relationship we have," said Schaefer.

"I said that I wanted to give him a very special birthday gift, and I felt that delivering a unification fight at age 49 would give him a chance to make history again. We'll be doing an event on both of those nights, and we have other names and other fights which will be held on that date as well. I'm working on some other big fights but I am not going to go into detail on those."

Stevenson and Kovalev are aligned with Showtime's network rival HBO, which has severed ties with Golden Boy.

"So he might have to beat all of them, which is no problem with Bernard. The blueprint is that he's going to fight Shumenov first. I talked to Don Chargin, who is working with Shuemov, and with Al Haymon, who is his advisor, and we're very close on getting the deal done with Beibut. It's not signed, but I do believe that, in principle, we have a fight. I'll be working to finalize all of this in the coming weeks."

It was back on Sept. 29, 2001, that Hopkins scored a 12th-round knockout over previously undefeated Felix Trinidad at New York’s Madison Square Garde, earning the undisputed middleweight title.

Hopkins’ triumph added Trinidad’s WBA title to his IBF and WBC belts, unifying the middleweight division for the first time since 1987 and tying  Carlos Monzon with his record 14th defense.

Now, Hopkins, sees a chance to achieve similar glory as a 175-pounder.

"It's going to happen because you've got two of the smartest guys, and two of the brightest guys that I trust, and that I respect first, and that's Al Haymon and that is Richard Schaefer," said Hopkins.

"When you've got that situation, and you have two fighters who say that they want to fight in order to get to the other light heavyweight champions, that's an ancient attitude. It hasn't been like that in so many years. That's why I think that the tournament of 2001 was so big, and promoted so big."