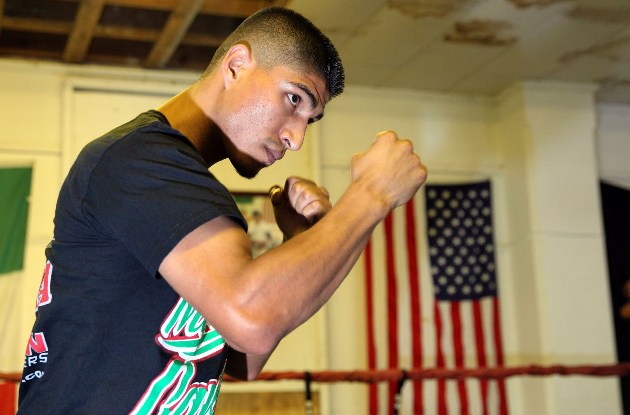 Two weeks prior, Garcia had entered as the RING featherweight champion against Puerto Rico's Roman “Rocky” Martinez, whom he dethroned as WBO junior lightweight titleholder by eighth-round knockout, rising from a second-round knockdown to do so.

"Mikey will tell you himself. He was over in Macau when his stablemate, Brandon Rios, fought Pacquiao," said Arum of Garcia, who has knocked out 10 of his past 11 opponents.

"He indicated to various people that down the road, he would look forward to a battle with Manny Pacquiao. Why wouldn't it be good?.Of course that was my thought. I'm a big Mikey Garcia fan."

The win over Martinez represented the second major title in a second weight class for Garcia, a 26-year-old who earned THE RING and WBO featherweight titles in January of last year by beating Orlando Salido, whom he dropped four times on the way to an eight-round technical decision.

Garcia followed up that victory with a fourth-round knockout of ex-beltholder Juan Manuel Lopez  last June. Burgos battled Martinez to a split-draw on the Garcia-Salido card.

Garcia, a mexican-American counterpuncher, eschews what he has called the traditional Mexican “brawler” or “close quarters” style for a more cerebral approach which employs his defensive skills, power and range.

"He has great technique, he has a very, very good defense, and he is a very powerful puncher and when he throws his punches, it's with great intent," said Arum. "He doesn't waste a lot of punches. He measures his opponent and then throws his punches accordingly and with a lot of power. So he's a complete fighter, and he's getting better."

Arum's assertion has been validated by the fists of Garcia, who was over the contracted 126-pound weight limit prior to defeating Lopez. Garcia correctly predicted that he would display “good power in both hands against Lopez.

"There's definitely options. I need to grow into the division. I would really like to unify the titles at 130 before moving up," said Garcia, who is trained by his brother Robert Garcia, and their father, Eduardo Garcia.

"But if I have a better shot at 135, then I'll go ahead and jump to 135, and get a title there, and then unify the titles at 135. Or, possibly, even move up higher to 140 if the right fights are there and the options are available, you know?"

Past victories over former contender Bernabe Concepcion and Mauricio Pastrana, whom Garcia stopped in the seventh and second rounds in March and September of 2012, respectively, were accomplished during a period of time when potential high-profile bouts with Salido, Lopez and former beltholder Celestino Caballero had failed to materialize.

"It's not always easy to put the fights together," said Garcia. "In this business, you've got to look at everything before you can move up in weight class."

"Mikey is one of the few American superstars in boxing. We have Mikey coming up there. Andre Ward, Floyd Mayeather, Timothy Bradley," said Arum. "There's not many other Americans who qualify as superstars. So I envision Mikey is taking on a lot of these non-Americans in really big international fights, and where that takes him, I'm not sure."

Should Garcia be successful against Burgos, Arum would entertain his being in potential matchups against either Pacquiao or Ukrainian sensation Vasyl Lomachenko (1-0, 1 KO), who will face Mexican WBO featherweight titleholder Salido on a March 1 card headlined by the Julio Cesar Chavez Jr. —Bryan Vera rematch.

"Does it take him up in weight to 135 and 140, and maybe a fight against Pacquiao, or, does it take him into a tremendous confrontation with Lomachenko, if Lomachenko proves himself with Salido and goes forward?"

A winner of his second Olympic gold medal at the 2012 Games in London, Lomachenko, 25, scored knockdowns with body shots in the first and fourth round of October’s fourth-round stoppage against Jose Luis Ramirez (25-4, 15 KOs) in a scheduled 10-rounder. Salido won the vacant belt by seventh-round knockout of Puerto Rican featherweight contender Orlando Cruz on the same card as Lomachenko-Ramirez.

"Lomachenko, based on his amateur background, was the greatest amateur of all time. He may be just as successful in the pros. And if he is, will a guy like Mikey Garcia be his biggest fight?" said Arum. "A lot of stuff can happen. We go one fight at a time, whether he goes up, stays in weight, stays at 130, or goes up higher, that's going to depend on what's happening in boxing."