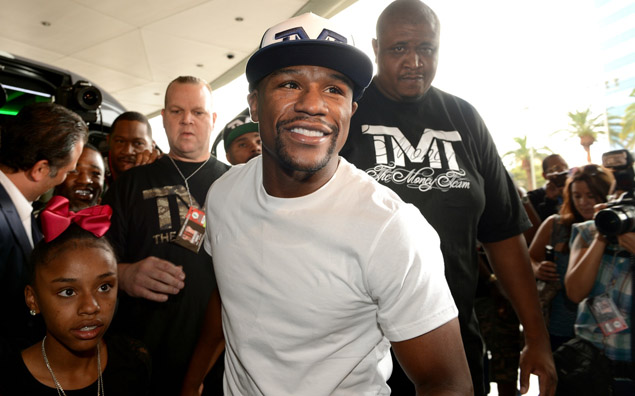 Floyd Mayweather Jr. is expected to arrive in South Africa on Wednesday as part of a week-long, four-city visit whose organizers hope to "resuscitate" boxing in the nation, a spokesman for the country's Ministry of Sport and Recreation told The Associated Press on Tuesday.

Plans are for Mayweather to give an exhibition at a gym in the Johannesburg township of Soweto, potentially visit the late South African President Nelson Mandela's apartheid-era jail on Robben Island when he's in Cape Town, and also, see the areas of Bloemfontein and East London on the south east coast, the city regarded as the hotbed of South African boxing.

Mandela, who died in December at the age of 95, was an amateur boxer and a big fan of Joe Louis and Muhammad Ali, and felt that boxing, like many sports, broke down the barriers of race.

"Remember, he's [Mayweather] the greatest athlete in the world," said ministry spokesman Paena Galane of Mayweather, who is not being paid for his appearances. "We wanted someone who's knowledgeable as a fighter and as a promoter," Galane said of South Africa's pursuit of Mayweather to be the catalyst for its boxing revival."

In the meantime, Mayweather (45-0, 26 knockouts) still is considering the opponent he will fight next on May 3 at the MGM Grand in Las Vegas amid wide speculation that he will face England's Amir Khan.

Khan (28-3, 19 KOs) stated publicly late last month that he has signed his contract to face Mayweather, who was last in the ring in September, when he dethroned Canel Alvarez by majority decision for the RING and WBC 154-pound championships.

Mayweather, who turns 37 in February, already was the WBA's reigning 154-pound titleholder, having earned that belt by unanimous decision over Miguel Cotto in May of 2012.

Mayweather-Alvarez as predicted on Showtime Pay Per View has become the highest-grossing boxing event of all time with $150 million in revenue reported, eclipsing the $136 million earned by Mayweather’s 2007 victory over Oscar De La Hoya.

An online report by Forbes’ Magazine estimated that Mayweather’s exclusive multi-fight venture with Showtime and its parent company, CBS Corporation, to be worth a guaranteed $250,000 million .  Mayweather was the highest-paid athlete in American sports  over the course of 2012 and 2013.