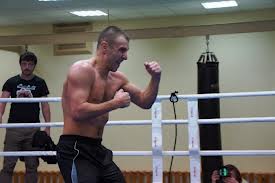 A 29-year-old Ukrainian with a mark of 29-1-1 that includes 12 knockouts, Bursak has won five straight since falling by unanimous decision to Hassan N'Dam N'Jikam in May of 2012.

Meanwhile, Fletcher, a 30-year-old Australian with a 17-1 (10) record, has earned five consecutive wins since being knocked out in the second round by unbeaten Billy Joe Saunders in September of 2012.

Golovkin (28-0, 25 KOs) is coming off November's eighth-round technical knockout over challenger Curtis Stevens that followed his third-round knockout of three-time title challenger Matthew Macklin, whom Golovkin floored with a body shot in June. Golovkin also scored stoppages in the seventh and third rounds over Gabriel Rosado and Nobuhiro Ishida in January and March of last year.

Golovkin will be after his 16th consecutive stoppage victory when he meets Adama, a winner of two straight bouts who never has been knocked out.