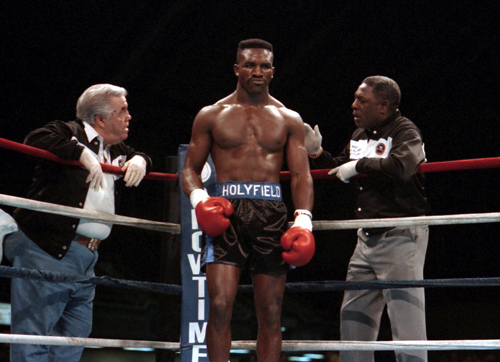 Ken Sanders, a longtime associate of Evander Holyfield, defended the former heavyweight champ, who has come under fire for his comments about homosexuality on the British TV show “Celebrity Big Brother.”

The 51-year-old boxing legend compared homosexuality to a "handicap" that "ain't normal" and claimed that being gay could "be fixed" during a recent appearance on the reality series.

“My phone has been ringing off the hook. I haven't talked to him about it, because he's still in London,” said Sanders, who has been associated with Holyfield's management since the 1984 Olympic bronze medalist won a unanimous decision over Lionel Byarm in November of ‘84.

“Evander is who he is, which is a wonderful guy, and I'll just put it that way. His opinion is his opinion. But let me just put it this way, and that is that I think that everybody has a right to their opinion, and the public's going to judge him basically on his opinion.”

According to the Associated Press, Holyfield has been reprimanded for his comments, which included his opinion that being gay "is a choice."

“My answer to something like that, when it comes to religion and sex and stuff, is that I have my own opinion and I keep to myself. I keep that inside. I have enough trouble leading my own life let alone to tell somebody else how to lead theirs,” said Sanders.

“Evander and I, we're just really good friends now, because Evander Holyfield's boxing days are over and I don't have a job with him, officially. But if he comes by, we go to lunch. I'm there for him if he needs me.”

Holyfield (44-10-2, 29 knockouts) was last in the ring for a 10th-round knockout over Brian Nielsen in May of 2011, a bout which helped him to rebound from a fourth-round no-contest against Sherman Williams in January of that year. Prior to facing Williams, Holyfield had scored an eighth-round knockout over Francois Botha in April of 2010.

Holyfield's last title bout appearance was in December of 2008, when he suffered a disputed majority decision loss to 7-foot Nikolay Valuev, who out-weighed him 310-to-214 pounds when they fought for the WBA belt.