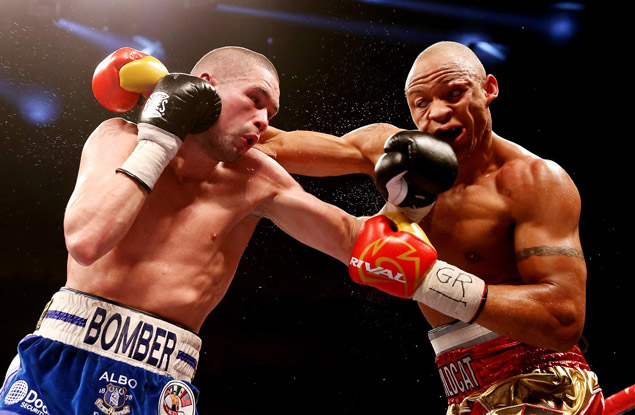 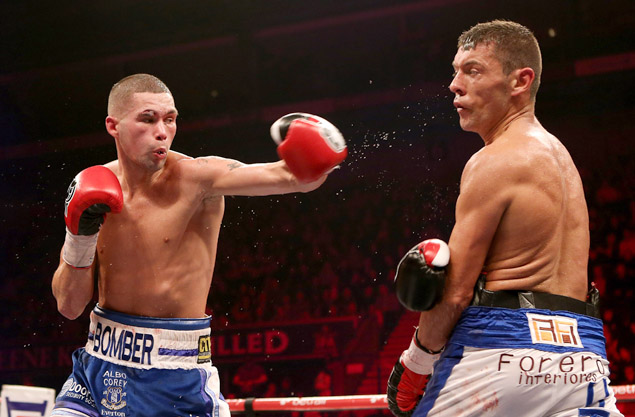 British star Tony Bellew will make his cruiserweight debut on March 15 at the Echo Arena in Liverpool, England on a show promoted by Eddie Hearn’s Matchroom Boxing and the two-time world title challenger has vowed to fullfil his dreams in the new weight class.

In November, Bellew succumbed to a sixth-round stoppage at the hands of Adonis Stevenson, THE RING light heavyweight champion, and the emaciating weight loss coupled with a comprehensive defeat have persuaded “The Bomber” to venture north in search of new prey.

“My performance wasn’t the best,” said Bellew. “Stevenson caught me with a huge shot that I didn’t see coming and there was nothing I could do about it. My game plan was to take him past the midway point, press the attack and test his stamina but it’s all just hindsight now.

“Stevenson is talented, strong and he is very hard to hit. For me elusiveness is his best asset because he appears out of range then suddenly catches you with hard shots. He’s great at what he does and pound for pound he’s got to be one of the top three best punchers in the sport.”

Bellew (20-2-1, 12 knockouts) refused to blame making weight for his loss to “Superman” Stevenson and accorded the Canadian southpaw plenty of respect. He also offered a fascinating insight into a prospective collision between his conqueror and Russian dynamo, Sergey Kovalev, THE RING’s No. 2-rated light heavyweight.

“I’m very impressed with Kovalev,” said the British star. “I spent time with him when I was in Canada and he’s a gentleman, as well as an incredibly strong fighter. That said there might be a reason why his team (Main Events) avoids putting him in against big punchers.

“Not once has Kovalev been in with someone who can bang and Stevenson knocks out any 175-pound fighter he hits flush. I think Adonis stops Bernard Hopkins and I would also favor him over Kovalev at this point. If I’m wrong and Sergey can take a great shot then he, in my opinion, he is the best light heavyweight in the world.

“I just sense that he might be vulnerable under fire.”

With Bellew making a 25-pound leap to cruiserweight there are those who believe that he is the one who will be vulnerable when bigger men land heavier blows on him, but “The Bomber” offers a solid case against that train of thought.

“I’ll hit harder and my punch resistance will actually increase,” said the 31 year old who competed as a heavyweight in the amateur ranks.

“At 175 pounds I was weaker and vulnerable. At cruiserweight I’ve taken full blooded shots from heavyweights like David Haye and David Price (in sparring) and not once have I been off my feet. I know 100 percent that I can take punches from cruiserweights and I will be happy to prove it by trading.

“I’m really the same size as these guys and the only top fighters who are taller than me are Yoan Pablo Hernandez (IBF titleholder) and Guillermo Jones. At cruiserweight I will take on any of the champions, as nobody really stands out as far as I’m concerned.”

The move up will also allow Bellew to redistribute his weight and amazingly that process started almost immediately after his last outing.

“I was lifting weights four days after the Stevenson fight,” said Bellew. “I’ve stayed in good shape and at the moment I’m 203 pounds. I’ve adjusted to the weight already and I look a lot bigger and healthier.

“I’ll be doing a lot of power lifting, implementing proper nutrition and I can focus 100 percent on my boxing training. The biggest factor is that I won’t be out running for days, weeks or months in order to make 175 pounds. Training camp will be about improving me as a fighter and I can feel the benefits already.”

Bellew is the second British fighter of note to opt for pastures new at cruiserweight in recent times. The former WBO light heavyweight titlist Nathan Cleverly elected to move up following a fourth-round thrashing by Kovalev but, having pulled out of two fights due to injury, is yet to compete at 200 pounds.

The Welshman actually handed Bellew his first defeat in October 2011 and a rematch between the two would be a huge domestic event in the UK.

“It’s definitely a possibility,” said Bellew. “I can’t even bring myself to mention his name because I despise him but, removing the disdain from the equation, it’s a fight that I would love to happen. Still, I’m not fully convinced that he’s going to fight again if I’m being honest.

“I think he’s fallen out of love with the game.”

That remains to be seen but the only thing Tony Bellew is retiring from is the light heavyweight division. The loquacious and viscerally intense boxer puncher remains full of fight and his arrival on the cruiserweight scene can only be good news for the division and the fans.

“I’m happy with what I’ve done at light heavyweight,” said Bellew. “I was British and Commonwealth champion and the number one contender with the WBC. I beat quality opposition in Isaac Chilemba and Edison Miranda and stopped Danny McIntosh, who had been European champion, with one punch.

“Not many fighters can lay claim to all that, but it’s gotten to the stage where my body just can’t make 175 pounds anymore. I just can’t wait to show you what I can do as a cruiserweight.”