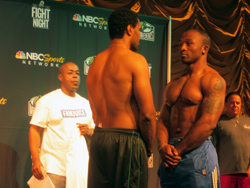 Durodola (17-1, 16 knockouts) will be after his ninth straight knockout win against Mchunu (14-1, 10 KOs), who virtually shut out former heavyweight title challenger "Fast" Eddie Chambers during a unanimous-decision victory on NBCSN Fight Night, in August, and then signed with Main Events. Mchunu's only loss was by sixth-round knockout to Zack Mwekassa in September of 2011.

Having replaced Garrett Wilson, who pulled out of the bout due to an injury, Durodola was last in the ring for October's sixth-round knockout of Mitch Williams, and suffered his lone defeat by fifth-round stoppage against unbeaten Akhror Muralimov in June of last year.

"I want to thank NBC, DiBella Entertainment and Main Events for giving me this opportunity to win the NABF title and to put myself in position for a world title," said Durodola, who stands 6-foot-2 compared to Mchunu's 5-8.

"The NABF title has been held by so many fighters who have become world champions, and I will not let Mchunu get in the way of my goals. I respect Mchunu as an elite boxer, but he has not faced anyone with the skills and power I will bring on Jan. 24."

In the main event, Brooklyn middleweight Curtis "Showtime" Stevens (25-4, 18 KOs) will attempt to bounce back from November's eighth-round stoppage loss to WBA 160-pound titleholder Gennady Golovkin. Prior to facing Golovkin, Stevens' stoppage of Saul Roman in August had represented his third first-round knockout during a run of four straight wins.

Long before his fourth-round stoppage dethroned previously unbeaten Nathan Cleverly for the WBO's light heavyweight belt in August, Russian Sergey Kovalev drew inspiration from another of his Slavic compatriots.

That motivation came from featherweight Evgeny Gradovich, whose split-decision overcame Billy Dib for the IBF's title in March of last year.

Since then, Kovalev has reeled off three consecutive knockout wins, culminating with November's second-round stoppage victory over Ismayl Sillakh in the first defense of the title he won from Cleverly.

"I was happy about Gradovich," said Kovalev, 30, who twice dropped Sillakh, and is 11-0-1 with 11 knockout wins in his past 12 bouts. "I'm happy because he's my friend and I was happy about him winning the IBF title. When Gradovich fought Billy Dib in March, that was the most excited I had been, even before I beat Cleverly."

Kovalev said that he has received similar support from others, such as Golovkin, who was born in Kazakhstan, and WBO junior welterweight Ruslan Provodnikov, who, like Gradovich, is from Siberia.

"Sergey called me after the fight, and he congratulated me," said Provodnikov, during an interview with RingTV.com. "We have a great relationship. I've known Sergey for a very long time. We're friends."
Kovalev agreed.
"I've heard the most from Golovkin," said Kovalev. "But everybody says congratulations to each other. There is support all of the time from everybody."