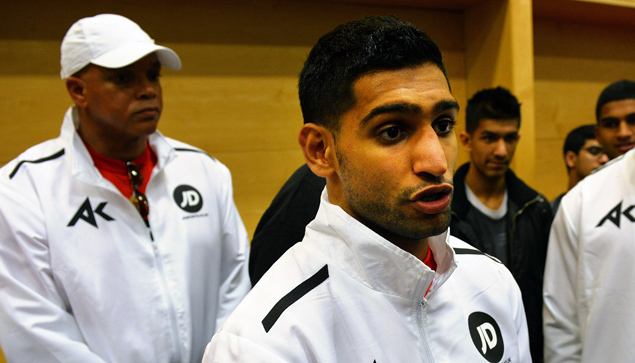 Calling Amir Khan "a horse that can run that race," trainer Virgil Hunter believes that the former two-belt junior welterweight titlewinner "can shock the world" if he is chosen to face Floyd Mayweather Jr. on May 3.

"I have respect for Floyd Mayweather. I see him as being the No. 1 fighter in the world, but I want to win. At the same time, he has my respect, even though I want to win. I'm not coming into this fight just to be part of the Floyd Mayweather sweepstakes, I'm coming into this fight to win, and I know that I have the horse that can run that race. It's going to be a fight that's going to really surprise the boxing world."

It appears that Khan (28-3, 19 knockouts) could get his shot against Mayweather (45-0, 26 KOs), having stated to Yahoo!Maktoob on Monday in Dubai that he already has signed to face the the 36-year-old veteran amid wide speculation that final details are close to being completed for their bout.

"My job is to get Amir to fight outside of himself, which is very possible if we have the correct camp," said Hunter of Khan, who could meet Mayweather at either The MGM Grand in Las Vegas or else at Barclays Center in Brooklyn. "My job is to get him to take it to another level. With his age and with his attributes, he can take it to another level. But people have written him off so soon."

Khan, 27, would be looking for his third straight victory in as many fights under Hunter, who replaced Freddie Roach after Khan was knocked out by Danny Garcia last July. Prior to facing Garcia, Khan had lost a disputed split-decision to current IBF 140-pound beltholder Lamont Peterson in December of 2011.

Khan has been victorious, however, in his past two bouts, by 10th-round knockout over Carlos Molina (a California-based lightweight prospect who is not to be confused with the IBF junior middleweight titleholder of the same name) in December of last year and by unanimous decision over former titleholder Julio Diaz in July.

"Amir Khan is by no means a complete fighter, and the more that he commits, the better he's going to get… Amir is at the stage right now where he's practicing in between fights and working on his flaws," said Hunter of Khan, who suffered a fourth-round knockdown against Diaz and has yet to compete as a true 147-pounder.

"That's really going to help him, doing the repetitions without the pressure of having to prepare for a specific opponent and to prepare for an upcoming date. We've had the luxury of singling out one or two things and going over it time and time again, day in, day out, and repetition in, repetition out. In saying that, a lot of people alude to the speed, and of course the speed is there, and of course he's fighting a great champion who is blessed with speed and great reflexes also."

But in addition to his loss to Garcia, and the fact that he was dropped and badly hurt by Diaz, Khan has endured lingering questions about his chin as a result of a first-round KO loss to Breidis Prescott in 2008.

"Of course people are going to comment on Amir's ability to take a punch and things like that, but I have my own theories about that and I don't see that being a factor any more as he has moved up in weight," said Hunter.

"Amir has begun to understand why he's gotten hit with punches that he doesn't see. That's not going to be an issue at all. Plus, we have time to have an organized camp and we can take time to work on some things, so there's no doubt in my mind that he can win the fight."

Mayweather was last in the ring in September, when he dethroned Canel Alvarez by majority decision for the RING and WBC 154-pound championships. Mayweather already was the WBA's reigning 154-pound titleholder, having earned that belt by unanimous decision over Miguel Cotto in May of 2012.

"His age hasn't been a factor so far. Against Floyd's previous opponents, after he's won, all anybody can say is the same thing, and that's that Floyd had too much speed, No. 1. Too tight of a defense and too much ring generalship. Well, that really shines with come-straight-ahead fighters and bangers. Against those kinds of fighters, those attributes really stand out," said Hunter.

Still, a victory by Khan over Mayweather might rank with James "Buster" Douglas' 10th-round knockout of Mike Tyson in February of 1990.

"If Buster Douglas would have been an active fighter today, he would have never seen himself beating Mike Tyson. But he showed up one night determined and ready to win and he fought outside of himself, and Amir is a fighter who is capable of that," said Hunter.

"But as you get older, that becomes harder and harder and harder. With Amir's youth and the time for preparation, and his ability to fight outside of himself, I believe that he has a chance of winning that fight, and that's the attitude that we're taking into it."