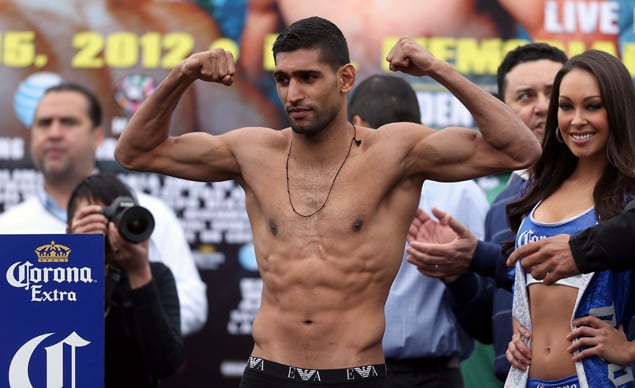 Although Amir Khan said that he has signed his part of an agreement to fight Floyd Mayweather Jr. on May 3, the former two-belt 140-pound titleholder claims that he would face former stablemate Manny Pacquiao in Dubai should Mayweather choose Marcos Maidana over a matchup against him.

Khan (28-3, 19 knockouts) shared his thoughts with Yahoo!Maktoob on Monday during the opening of EMD Fitness Gym in Dubai, doing so amid wide speculation that final details are close to being completed for Mayweather to face him at either The MGM Grand in Las Vegas or else at Barclays Center in Brooklyn.

While Mayweather (45-0, 26 KOs) has mentioned Maidana (35-3, 31 KOs) as being "in the lottery jackpot box" to be his next opponent, he also said that a megabout with Pacquiao (55-5-2, 38 KOs) "won't happen" because the eight-division titlewinner is promoted by Golden Boy rival Top Rank.

"A fight over here in Dubai would be crazy. It would be a new Vegas," Khan said of fighting Pacquiao in the wealthy city in the United Arab Emirates.

Khan pooh-poohed Mayweather's mentioning of Maidana as a potential opponent.

Neither Golden Boy CEO Richard Schaefer nor Leonard Ellerbe, CEO of Mayweather Promotions, could be reached for an immediate comment.

Although he has yet to compete as a true 147-pounder, Khan's resume includes unanimous decisions over Maidana as well as a technical decision victory over Mexican great Marco Antonio Barrera.

Meanwhile, Mayweather took shots at Khan and Maidana through his Twitter account with illustrations that showed him dropping Khan and also nailing Maidana with a right hand.

"I've always said that styles make fights. If he wants to fight a slow-handed, slow-footed guy, well, then, let him go ahead," said Khan. "But people have always said that Floyd has never faced the best fighters in his era, and has never faced the best fighters, normally, who are in their prime. I mean, they say that it's between me and Maidana who he's facing," said Khan.

In his past two bouts, Khan won by 10th-round knockout over Carlos Molina (not to be confused with the IBF junior middleweight titleholder of the same name) in December of last year and by unanimous decision over former titleholder Julio Diaz in July.

Khan, 27, would be looking for his third straight victory in as many fights under trainer Virgil Hunter, who replaced Freddie Roach after Khan was knocked out again by Danny Garcia in July of last year. Prior to facing Garcia, Khan had lost a disputed split-decision to current IBF 140-pound beltholder, Lamont Peterson in December of 2011.

"I'm telling you that Amir is going to be more competitive than all of those other guys that Floyd has been in there with, because Amir has the ability to fight at the highest level. So Amir has a better chance of upsetting Floyd than all of the other guys who have come before him," said Hunter.

"Because he can do so much more. Amir is committed to working on his flaws, and that's all that we need him to do. Amir, at his young age, and because of certain flaws that he has, he has a tremendous upside. He is by no means a complete fighter."

Khan ended a run of 10 bouts and an 8-2 mark that includes four stoppage wins under Roach, with whom he began working after a first-round KO loss to Breidis Prescott in 2008.

Khan also sparred several times with Pacquiao and trained alongside him, vowing, until Monday, that they would never meet during a professional fight.

"Yeah, definitely, I'd fight Manny Pacqauio," said Khan. "Now, look, it's business, and I know that we're friends, and we respect each other. But I would, definitely. I'd consider the fight, and I'm sure that he would as well."

Pacquiao was last in the ring for last month's welterweight unanimous decision over Brandon Rios that helped him to rebound from a sixth-round stoppage loss to Juan Manuel Marquez in December of last year.

Prior to Marquez, Pacquiao was dethroned as WBO 147-pound beltholder following a split-decision loss to Tim Bradley in June of last year.

"In the future, I still believe that he can secure the big fights and become a world champion again. He's a good friend of mine and I believe that he has a big following here. If we have a big fight over here I'm sure that Manny Pacquiao could come and have a fight again here. I'm a big fan of Manny Pacquiao and he's a good friend of mine, also," said Khan.

"I've trained with him, and I've sparred with him, and I wish him all the best in his career. That would be huge. That would be huge. But at the end of the day, I'm Amir for the big boy, Floyd Mayweather, but if the likes of Manny Pacquiao or the other fighters are there, then I'm ready. Have I ever turned a fight down? Never. I'll fight wheover they put in front of me, so let's get it on."