While many people around the world have been enjoying holiday festivities, IBF junior lightweight champion Argenis Mendez has been putting in the hard work.

“It's always hard being away from my family and holidays make it that much worse but I know I have to sacrifice if I want stay champion,” said Mendez, who will meet unbeaten mandatory challenger Rances Barthelemy on the season premiere of ESPN2’s Friday Night Fights this Friday. “I made a commitment to this sport and that comes with the territory, but that also makes me angry when I step in that ring.” 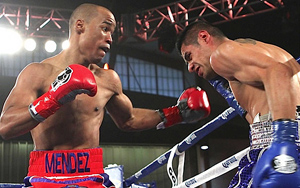 He followed that with a draw over the summer against Arash Usmanee. The 27-year-old Dominican Republic native has learned his lesson and still clearly harbours ill feeling towards his two losses.

“I've been robbed twice before, once in Denver, and once in Mexico, where I had knocked down both guys during the fight,” he said. “Now, I'm just determined to get in there and be more aggressive so that there is no doubt that I am the winner.”

Mendez referenced an eight-round split decision to Jaime Sandoval in 2008 when he was still a prospect and his first fight against Salgado, which he lost by close unanimous decision in 2011.

“I thought Mendez won his last fight (vs. Usmanee),” said legendary heavyweight champ Mike Tyson, who is Mendez’s promoter. “It was a sensational fight; good for boxing but horrible for my boxer.”

“Mendez is a great boxer who learned a valuable lesson to never leave a fight in the hands of the judges. He is very athletic in the ring, difficult to hit and a good boxer, but also able to knock out his opponent like he did to Salgado when he won the world title. We expect to have him in a major fight in 2014 and to keep improving with John David Jackson as his new head trainer.”

Mendez has nothing but praise for his Friday opponent, a former Cuban amateur standout.

“Barthelemy is a good boxer with great amateur experience,” Mendez told RingTV.com prior to leaving his training camp in Florida. “He's fought his way to the top and that’s why he currently is number one. Obviously, he did something to get there.”

Anson Wainwright: What are your thoughts on the Barthelemy fight?

Argenis Mendez: Barthelemy is a good boxer with great amateur experience. He's fought his way to the top and that’s why he currently is number one. Obviously, he did something to get there.

AW: In your last fight back in August you drew with Arash Usmanee. Looking back what are your thoughts on that fight?

AM: I definitely learned that when you're in the ring you have to give it your all. Sometimes what you and your corner think isn't what is going through the judges’ minds. Honestly, I don't know what fight the judges saw. There was no way that bout was a draw.

Unfortunately, this wasn't the first time that this happened to me. I've been robbed twice before, once in Denver, and once in Mexico, where I had knocked down both guys during the fight. Now, I'm just determined to get in there and be more aggressive so that there is no doubt that I am the winner.

AW: Why do you feel you looked so impressive winning the title against Salgado and then less so against Usmanee?

AM: Usmanee was a more aggressive fighter and he could take a punch; Salgado could not (laughs).

AW: Where are you training for this camp? Tell us a little about it. What's a typical day?

AM: I'm training in Florida with John David Jackson. He has been great. He's definitely been teaching me how to be more aggressive, throw more punches and improve my power. He's a great strategist and together we have worked out a great fight plan for this upcoming bout.

A typical day for me consists of a 5-7 mile run around 6:30 a.m. with my strength coach, Axel Murrillo. We go home and rest a while before heading to the boxing gym at 3:00 p.m. There I work out with Jackson for about two hours. In the evening, my strength coach and I do various biometric workouts at the 24-hour fitness center located nearby.

AW: If I can take you back, you were born in the Dominican Republic but now live in New York. Can you tell us a little about your younger days and then about moving to New York?

AM: I grew up poor and at the age 13 my father took me to a boxing gym, where I fell in love with the sport. From that day on I knew that boxing was going to get me where I wanted to be. Marino Minaya was my trainer throughout that time and I participated in many amateur tournaments in the Dominican Republic.

I was also fortunate enough to represent my country all over the world, including the Pan American Games, World Championships and the Olympics. In these tournaments, I was able to beat top U.S. prospect, Roberto Benitez, and many other up-and-coming fighters. Shortly, thereafter, people began taking notice and I was introduced to my current manager, Jose Nunez. With his help I was able to travel to New York and there I began my professional career, which brings us to where we are today.

AW: You were a highly decorated amateur. Can you tell us about that?

AM: In the amateurs I fought (four-time U.S. amateur champ) Roberto Benitez, (Guillermo) Rigondeaux, (two-time Olympic gold medalist) Aleksei Tishchenko, Juan Manuel Lopez and many other talented fighters. Throughout those years, I participated in several tournaments such as the World Championships, Pan American Games and the Olympics. I ended my amateur career with a record of 326-12.

AW: Now that you're a world champion what goals do you have in the sport? It was suggested you may move up to lightweight? Would you like to unify, just defend the title as much as possible, etc.

AM: Before moving up, ideally, I will like to unify titles in my weight class, possibly against Mikey Garcia. I’m comfortable in this division and have no problem making weight, but I want the biggest fights that are out there. If that requires me moving to the lightweight division, then that’s what I will have to do. I have already discussed this with my manager, Jose Nunez, and we are prepared to do what’s necessary to get my career rolling.

AW: You've lost twice as a pro but do you feel undefeated in that the first fight was a split decision Jaime Sandoval and then to Salgado a couple of years ago that some questioned?

AM: Like I mentioned earlier, I knocked both those guys down in their hometowns and that’s the only thing that saved them (hometown decisions). In my eyes, I am still an undefeated fighter because no one has clearly beaten me.

AW: If we can look at the RING magazine rating at super featherweight, what are your thoughts on each 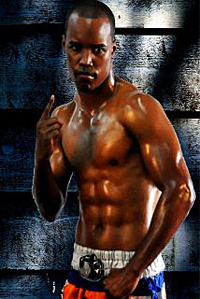 1 – Takashi Uchiyama – Good fighter but doesn’t leave Japan.
2 – Mikey Garcia – Two-time champion; speaks for itself.
3 – Roman Martinez – On his way down.
4 – Argenis Mendez – The best at 130 pounds.
5 – Juan Carlos Burgos – Tough fighter.
6 – Diego Magdaleno – Don’t know much about him.
7 – Takashi Miura – A champion that doesn’t fight outside Japan. [Editor’s note: Miura’s last fight, a brutally fought decision over Sergio Thompson, was in Mexico.]
8 – Takahiro Ao – Don’t know him.
9 – Will Tomlinson – Coward (he turned me down). [Editor’s note: Tomlinson has stated to the media and on social media that he wants to face Mendez.]
10 – Sergio Thompson – Never seen him fight.

AW – Tell us a little about yourself as a person away from boxing, what do you enjoy doing?

AM: In my spare time I enjoy playing basketball, shopping, dancing, listening to music and travelling back to the Dominican Republic to spend time with my family. I'm kind of a homebody and outside of boxing and my family I don't do much. These are the two things that drive me every day to do better and that’s what I focus on.

AW: Who are your boxing heroes?

AM: I enjoy watching fighters such as Floyd Mayweather. He fought hard to get to the top and has taken full advantage of his talent to keep boxing alive. I hope to one day to follow in his footsteps.

AW: Lastly do you have a message for Barthelemy ahead of your meeting?

AM: He better bring his A game because I know I'm bringing mine.